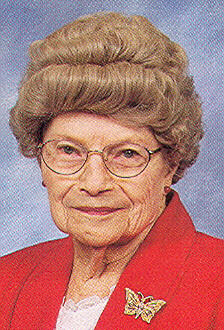 Esther L. Reichart, age 94, of Appleton, formerly of Milwaukee, was called home to her Savior on Saturday, March 14, 2009. She was born to Otto and Emma (Raasch) Siegmund on September 10, 1914 in Milwaukee. She graduated from Emmaus Lutheran Grade School in 1928 and from Lutheran High School in 1932. On July 23, 1938 she married Harvey George Reichart at Siloah Lutheran Church in Milwaukee. He preceded her in death in 1957. Esther worked as a secretary in various businesses. She enjoyed doing crafts and giving them as gifts.

Esther is survived by her daughters: Susan Lemke of Appleton and Sally (Ken) Peatow Cromer of Hermiston OR; six grandchildren: Angela (Ted) Donahue of Eugene, OR, James (Tracy) Lemke of Brillion, Aaron (Mimi) Peatow of Des Moine, WA, John Lemke of Shiocton, Rachel (Lenn) Greer of Irrigon, OR, and Rebecca Peatow Nickels of Portland, OR; 11 great-grandchildren: Maxwell, Jordon, Victoria, Tyler, Lea and Emily Lemke, all of Wisconsin; Liam and Gavin Donahue of Oregon; Ethan Greer of Oregon; and Emmanuelle and Anne Peatow of Washington State; two sisters-in-law: Charlene Siegmund and Eldora Siegmund; and nieces, nephew, and many friends. She was preceded in death by her husband, Harvey; brothers; George and Charles; sisters: Ella, Clara, Lillian, and two infant sisters.

In lieu of flowers, please make a donation to a Lutheran charity of your choice.

The family extends a special thank you to the staff at Colony Oaks Care Center and Southern Care Hospice for their loving care.