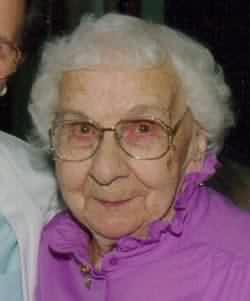 Age 93, died Monday March 25, 2002 at AMC. Esther was born April 22, 1908 to the late Fred and Augusta Sauer in Mattoon, WI. She married Clarence Mauritz on November 9, 1940 in Mattoon, he preceded her in death. Esther was an intelligent, well read, spirited individual who enjoyed telling a good story. She was well known as a caretaker to anyone in need. Esther enjoyed crafts, knitting, crocheting, gardening, camping, hiking and the adventure of the outdoors. She volunteered for various organizations including the Food Pantry, Community Clothes Closet, Hospitals and Orphanages.

A memorial is being established in her name.