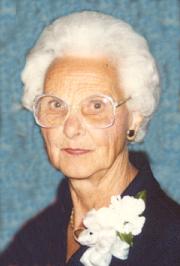 Estella Jansen, of Combined Locks, age 91 years, died on Easter morning, April 8, 2007 at Parkside Care Center, Little Chute. She was born February 15, 1916 in Grand Chute, the daughter of the late John and Dina (Goemans) Vander Velden. In February 1935 she became the wife of Harvey Jansen at St. John Catholic Church, Little Chute. She was a devoted spouse, mother, grandmother and great grandmother. Estella enjoyed traveling with Harvey, reading, needlework and time with her children, grandchildren and great grandchildren.

The funeral liturgy for Estella will be held at 11:00 a.m. on Wednesday, April 11, 2007 at ST. PAUL CATHOLIC CHURCH, 410 E. Wallace Street, Combined Locks with Fr. Jim Lucas officiating. Burial will take place at St. Paul Catholic Cemetery. Visitation will be held at the church on Wednesday from 9:30 a.m. until the time of mass. In lieu of flowers, a memorial fund has been established in her name.

We are grateful for the devoted and diligent care of Mother by all the staff, especially the nurses, aids and rehabilitation group at Parkside Care Center in Little Chute.

Our thanks to family, friends, neighbors and relatives, especially nieces Donna and Linda, for their visits and calls to Mother. The visits and calls were an important part of her stay at Parkside.