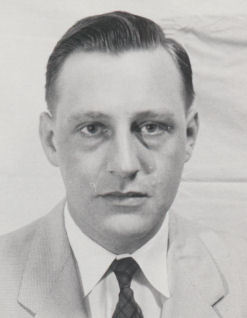 Ernest graduated from Deveaux Military Academy in Niagara Falls, New York; from there he went to Rensselaer Polytechnic Institute, graduating with a bachelor's degree in chemical engineering. After graduation, Ernest worked for Hooker Electrochemical until he was drafted into the U.S. Army during the Korean War. Once he was discharged, he returned to work for Hooker Chemical and was transferred to Appleton. He was moved to Appleton mfg. division of Menasha Corp from which he retired in 1990.

Ernest loved the outdoors. He was an eagle scout growing up and eventually became a leader. He also loved sailing, canoeing, camping, gardening flowers and vegetables, and puttering around his home.
He is survived by his wife, Elizabeth (Olson) Blew; son Keith (Laura) Blew; daughter Heather (Doug) Miller; and grandchildren Steven and William Blew.

A memorial service for Ernest will be held at 11:00 a.m. on Saturday, June 27, 2015, at ALL SAINTS' EPISCOPAL CHURCH, 100 N. Drew Street, Appleton. A time of visitation will be held at the church from 10:00 a.m. until the time of the service. He will be laid to rest in the columbarium at All Saints' Episcopal Church. In lieu of flowers, donations to the Salvation Army, where Dad volunteered, are appreciated. Online condolences may be offered at www.wichmannfargo.com.

The family thanks everyone for their thoughts and prayers at this time, and hopes to see everyone at the funeral.
.