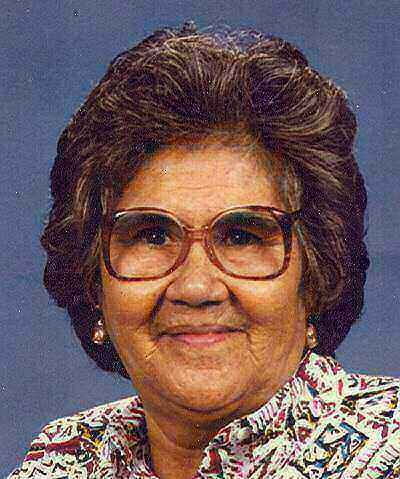 Age 81, after a courageous battle with cancer, died on Wednesday, October 27, 2004, surrounded by her family at her home. Epolita was born on August 13, 1923, in Corpus Christi, Texas, to the late Guadalupe and Consuelo Castillo. She married Santos Gutierrez; he preceded her in death on September 9, 1999. Epolita was a loving wife, mother and grandmother; she will be dearly missed. Survivors include children, Jesus (Seagram) Martinez, Waynesville, Missouri; Simon (Maria) Martinez, Appleton; Gavino (Jean) Martinez, Appleton; Velma (Johnny) Bautista, Houston, Texas; Esmeralda (Sergio) Garcia, Appleton, Rosario Martinez, Appleton, Diana Ramirez, Appleton; David Martinez, Appleton; and Esther (Jesse) Schoen, Appleton. She is further survived by 3 sisters, four brothers, 39 grandchildren, 55 great grandchildren and 3 great great grandchildren. She was preceded in death by her sons, Antonio Martinez and Rene Martinez, and her first husband, Francisco Martinez. Funeral services will be at 10:30 a.m. on Saturday, October 30, 2004, at WICHMANN FUNERAL HOME, Appleton, with Funeral Celebrant Pete Reinl officiating. Friends may call at the Wichmann Funeral Home on Friday from 4:00 to 8:00 p.m. and on Saturday from 9:30 a.m. until the time of services. Interment will be in Riverside Cemetery, Appleton.
WICHMANN FUNERAL HOME
537 North Superior Street
Appleton 739-1231
www.wichmannfuneralhomes.com