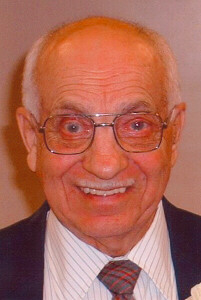 Age 87, passed away peacefully, surrounded by his family, at Appleton Medical Center on Tuesday, December 25, 2007. He was born in Mackville on June 25, 1920 the son of the late Martin and Anna (Khor) Kuba. He was proud to serve in the United States Army, being in both Africa and Europe during World War II. On March 24, 1951, he married his wife of 44 years, Rosella Heinz. She preceded him in death in 1995. Emil worked for Geo. Whiting Paper Company for 25 years, retiring in 1985. He was a member of Sacred Heart Catholic Church, Appleton. Emil will be remembered for being an avid Cubs and Packers fan, walking, and his love for his grandchildren.

The funeral liturgy will be at 11:00 a.m. on Friday, December 28, 2007 at SACRED HEART CATHOLIC CHURCH, 222 E. Fremont St, Appleton, with Fr. Norm Krutzik officiating. Friends will be received at the church on Friday from 9:00 a.m. until the time of the Mass. Entombment will be in Appleton Highland Memorial Park.

The family extends a special thank you to the staff at Colony Oaks Care Center, and the emergency room and Floor 3 Southwest staff at Appleton Medical Center for their compassionate care.