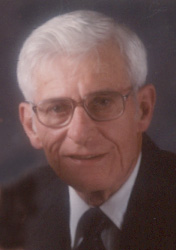 Emil J. St. John, age 80, of Kaukauna, passed away Wednesday evening, May 21, 2008. He was born May 18, 1928, to the late Fred and Louise St. John in Marquette, Michigan. Emil served with the U. S. Navy during WWII for 4 years and was stationed in the South Pacific. He moved to Kaukauna in 1952 and was employed as a stone mason for numerous contractors. Emil was an avid gardener and enjoyed wood working. Emil was proud of being a 45 year blood donor at the Community Blood Center, and in the end when he needed platelets, was very thankful for those who donated. He was a member of Holy Cross Catholic Church and a 50 year member of the International Union of Bricklayers and Allied Craftworkers. Survivors include his wife of 55 years, Jane (VanderBloomen) St. John; four children, Val (Charlie) Fischer, Kaukauna; Tony St. John and Ann St. John, Kaukauna; Tom (Mary) St. John, Little Chute; Lee (Joy) St. John, Darboy; 12 grandchildren, Courtney (Craig) Peterson, Kara (Mike) Brochtrup, Jordan Fischer, Betsy (Nathan) Frailey, Stephanie St. John, Tommy St. John, Nick St. John, Emily (Tim) Opacich, Danny St. John, Adam VanDynHoven, Luke VanDynHoven and Isabelle St. John; brothers and sisters, Fred (Lyrel) St. John, Marquette, MI; Betty (Bob) Parks, Portage, MI; Tom St. John, Marquette, MI; and his aunt, Ferne Vermeulen. He is further survived by his brothers and sisters-in-law, Alma (Tony) Gazzana, West Allis; Jean VanderBloomen, Kaukauna; Joan (Joe) Lewandowski, Kimberly and Lucille Hopfensperger, Oregon; many nieces, nephews and friends. He was preceded in death by his sister, Mary (Ray) Thyssee, a niece, Martie McGrail, his uncle, Victor Vermeulen, an aunt, Gabriella (August) Merckx, his father and mother-in-law, Fred and Louise VanderBloomen, brothers and sisters-in-law, Floyd and Richard VanderBloomen, Alice (Bob) Nack, Carol (Lawrence) Van Cuyk, Jerry (Marie) VandenBloomen, Fred VanderBloomen, nephews, James VanderBloomen, Ted VanCuyk and a niece, Nan Rogers. The memorial funeral liturgy for Emil will be held at 12:15 pm, Saturday, May 24, 2008 at HOLY CROSS CATHOLIC CHURCH, 309 Desnoyer Street, with Father Tom Pomeroy officiating and Emil's nephew, Gregg St. John, as Master of Ceremony. Burial will be in Holy Cross Cemetery. Friends may call at the church on Saturday, from 10:00 am until the time of the mass.

Thank you to Dr. Joseph Graunke and staff at the Kaukauna Clinic, Dr. Avi Bar-Lev and staff at the Martha Siekman Cancer Center and the staff at outpatient treatment center of Appleton Medical Center.