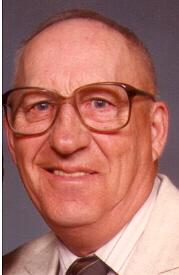 Emery H. Eggenberger, age 81, went to be with the Lord on June 5, 2005. He was born in Plum City, Wisconsin on February 16, 1924 to the late Louis and Lucille (Lange) Eggenberger. On September 20, 1950 he married Betty Schroeder at St. Paul Evangelical Lutheran Church.

Emery had many interests including woodworking, playing the harmonica, vegetable gardening, bowling and playing sheepshead with family and friends. He loved brandy old-fashioneds, ice cream and telling stories. He was an avid hunter and fisherman. He shot many deer from which his nickname ‚ÄúBuck‚Äù was derived. He also caught many trophy muskies. He served in the 82nd Airborne Division of the U.S. Army during World War II. He worked for 34 years at Riverside Paper Company. In recent years, he especially delighted in his three grandchildren.

Emery is preceded in death by Betty, his wife of 51 years; his parents; brother, Earl and two sisters, Helen and Marie.

The funeral service will be held at 11:00 a.m. on Wednesday, June 8, 2005 at St. Paul Lutheran Church, 302 North Morrison Street, Appleton with Pastor Kenneth Frey officiating. Friends will be received at the funeral home on Tuesday, June 7 from 4:00-8:00 p.m. and at the church from 10:00 a.m. until the time of the service. Burial will be at Appleton Highland Memorial Park.

The family wishes to extend their heartfelt appreciation to the staff at Angelus Retirement Community, Cherry Meadows Hospice and the ThedaCare Hospice Staff. A special thank you is also extended to the pastoral staff at St. Paul Evangelical Lutheran Church. A memorial fund in Emery‚Äôs name is being established.