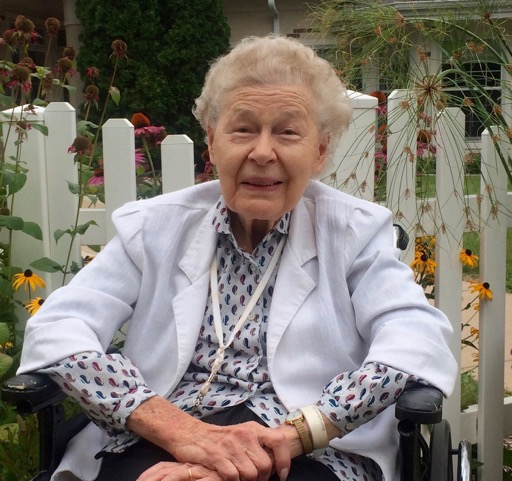 Elnora Louise Dutton, age 91, was promoted to glory on May 11, 2016 in Appleton, WI. She was born on September 10, 1924 in a farmhouse near Rising City, Nebraska, the daughter of George and Sophie (Oldigs) Fricke. She joined an elder sister Nadine (McPherson, deceased) and the family grew with brother Lawrence and younger sister Lorrien (Givens). She worked as a telegraph operator, teacher, movie theater owner, and held numerous positions within the Union Pacific Railroad organization. She married Arthur Harold Dutton on June 30, 1946 in Omaha, Nebraska and celebrated a loving 60 years of marriage until Arthur died in 2006. They were blessed with two children, John and Deborah.
Elnora and Arthur lived 47 years in the Park Forest, Illinois area where they were involved with their children's schools, community, gardening, and Hope Lutheran Church. Valparaiso University was important to Elnora, where she was a longtime “Guildy Lady”. In 1999, they moved to Appleton, WI to be closer to family. They were part of the Faith Lutheran church community, sharing their talents and making many friends. Elnora has been part of The Heritage residential community since 2006 and found a nurturing environment for growing old. Both Arthur and Elnora spent their ?nal days in Cherry Meadows, the hospice unit of The Heritage. Their family has been blessed over the years by the care received on The Heritage campus during these last 10 years and extends a special thank you for their compassion and interest. Her caregiver, Jean, was an integral and loving part of her life since the move to Appleton.
Elnora was loved by many and is survived by her son John (Judy) Dutton of Peoria, IL; daughter Debi (Jim) Bashleben of Vero Beach, FL; grandson Robert (Sierra) Bashleben of Palmer, AK; granddaughter Carly (John) Partridge and great grandchildren Quinn and Tucker in Denver, CO; granddaughter Amanda Dutton and her mother Marcia in Irvine, CA; granddaughter Elissa (Gannon) Sungar and great grandson Declan in Denver, CO; sister Lorrien Fricke Givens and brother Lawrence (Norma) Fricke in Columbus NE and many nieces and nephews.
Elnora relied on her deep faith throughout her life and often ended letters with an appropriate Bible verse. A favorite was Proverbs 3:21 “Have two goals: wisdom – that is knowing and doing right – and common sense.”
A private family burial is planned where they will celebrate her long, loving, and wonderful life as daughter, sister, wife, mother, grandma, great grandma and friend. Memorials can be sent to Cherry Meadows Hospice, 2500 South Heritage Woods Drive, Appleton, WI. 54915. Online condolences may be offered at www.wichmannfargo.com.