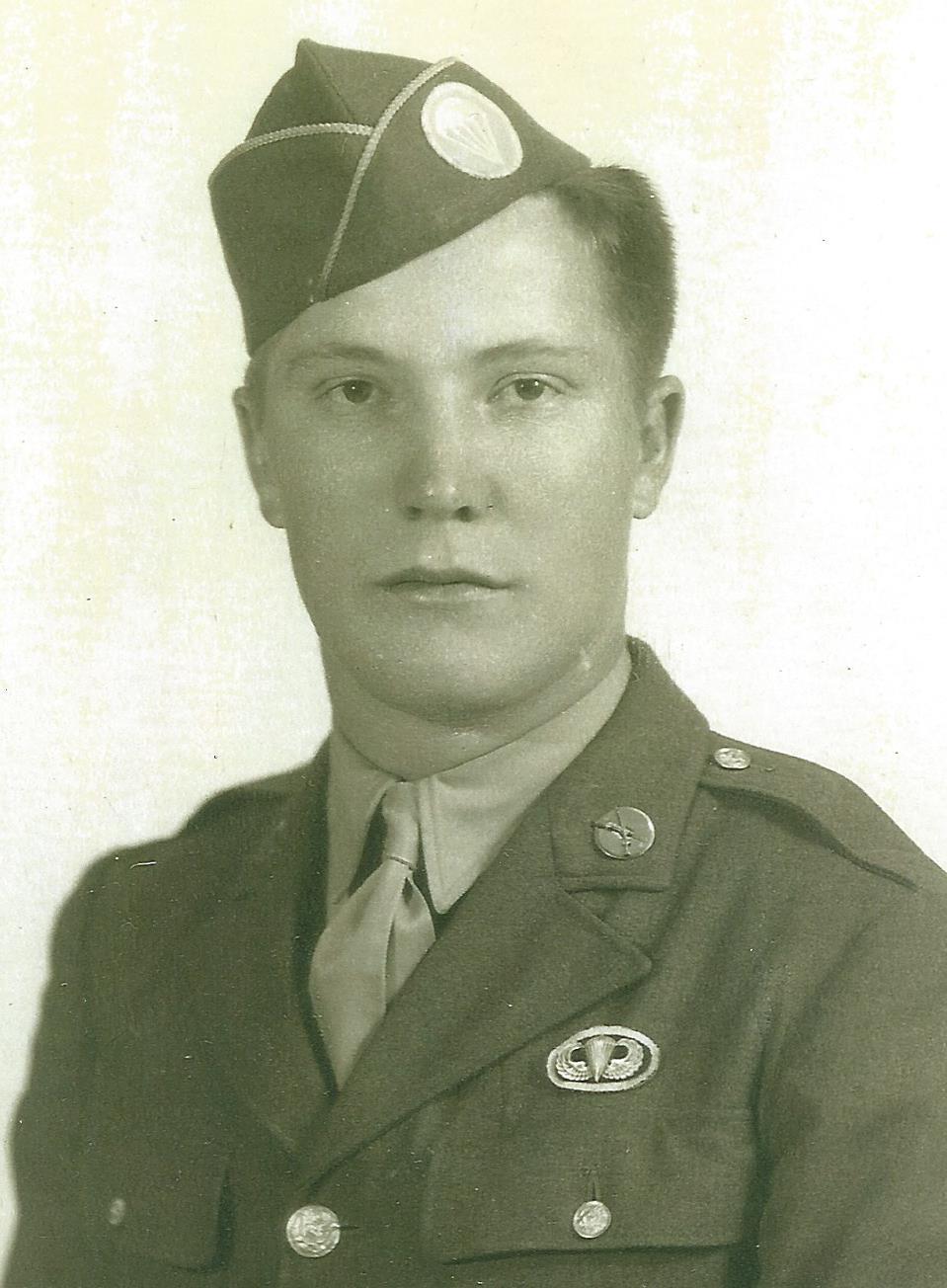 Elmer E. Martell, age 91, of Menasha, passed away on Thursday, January 15, 2015, at the Wisconsin Veterans Home in King. Elmer was born on November 10, 1923 in Menasha to the late Joseph and Rose (Konshak) Martell. Elmer was a distinguished high school athlete and played football under Coach Nathan Calder. Upon graduation from Menasha High School in 1941, he enlisted and served with the 82nd Airborne 508th Parachute Infantry Regiment (PIR). He was part of the first wave to parachute into Normandy in the early hours of June 6, 1944. Of his 16 man jump squad, he was one of only two men not killed in the operation. Amid the chaos, he was dropped in the wrong location amid overwhelming German forces. Elmer evaded capture until daylight, but spent the rest of the war as a POW in stalags located in Poland and Germany. His incredible wartime experiences over the next ten months read like fiction. Days after his capture, he stood against a wall and nearly executed for secretly retaining a hand grenade, as Elmer put, “in case I needed it.” He returned to the United States after the defeat of Germany, and was en route to participate in the invasion of Japan when the atomic bomb ended the Pacific War. Elmer served proudly and bravely, though the horrors of war remained with him throughout his life. He was awarded the Bronze Star for bravery. In 2013 he was awarded the “Prisoner of War Medal.” He was a proud member of Menasha Veterans of Foreign Wars Post 2126. On December 2, 1950, Elmer married Rachel M. Klatt at St. Margaret Mary Church in Neenah. He was a press scheduler at American Can Company in Menasha until he retired in 1980. Following his retirement he lived an active life, planting trees, hiking, and fishing at his beloved cottage on the Pine River in Florence County and spending time with children, grandchildren, and friends. Deer hunting with the old gang was always a highlight of his year. For years, he and Rachel enjoyed traveling around the country attending the reunions of the 508 PIR. Elmer was a kind and friendly man with a great sense of humor. He was always willing to help others and share a small joke that would bring a smile. He kept in touch with many lifelong friends. He could easily strike up a conversation with a stranger in a restaurant or store. He was a generous person, freely helping friends, relatives, and children with projects, moves, and child care. He was sensitive; was able to cry in life's sad moments and said, “I love you” often. Elmer loved to read, keep up on current events, watch the Packers and golf. He and Rachel shared a love of dogs.
Elmer is survived by his wife, Rachel, and their seven children and spouses: Margaret (Paul) Reichert, William (Rose) Martell, Barbara (Gary) Heidmann, Patricia (Steven Cleary) Martell-Cleary, Joseph (Julia) Martell, Karen (Guy) Smith, and Thomas (Kathy Kinney) Martell. Elmer was grandfather to: Robin (Samantha) Synhorst, Charles (Cali) Kellerman, Rachel Reichert, Anemone (Scott) Beaulier, Daniel (Anna) Martell, Peter (Beth) Martell; Madeline and Clare Martell, and Cora and Gavin Martell. Elmer had 8 great-grandchildren: Vitoria and Marjorie Synhorst, Lilla and Roma Beaulier, Greyson Martell, Ethan and Brandt Martell, and Olive Kellerman.
He is further survived by two sisters: Sister Lillian Martell and Sister Marion Martell; sisters-in-law: Lois Klatt, Linda Klatt, Eva Martell, Lynn Klatt, Pat (Paul) Martell; a brother-in-law, Fred Klatt; and many nieces, nephews other family and friends.
In addition to his parents, he was preceded in death by his sisters: Rose, Melania (Harry) Resch, Florence (Ned) Swan, Lorraine (Dr. Edward) Meyer; an infant brother, Joseph; and brothers: John (Florence) Martell, Paul Martell and Richard Martell; his sisters-in-law: Ruth (Don) Ninneman and Susan Klatt; and brothers-in-law: David and Daniel Klatt.
A Memorial Mass will be held at 11:00am on Saturday, January 24, 2015, at St. Patrick Catholic Church, 324 Nicolet Blvd in Menasha. A Memorial Gathering will be held from 9:00am until the time of the Mass at the church. Military Honors will follow the Mass. Inurnment will take place in St. Mary Cemetery in the Town of Menasha in the Spring of the year. In lieu of flowers, memorials will be donated to the Salvation Army and the local animal shelters.

Elmer's family extends their heartfelt gratitude to the staff from the Wisconsin Veterans Home in King and ThedaCare Hospice for their loving and devoted care of Elmer during his last months of life.