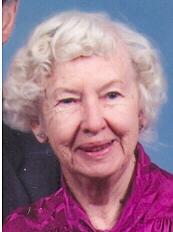 Ellen N. Lamon, age 93, of Appleton, died Sunday morning, October 9, 2005, at Prairie Home, Menasha. She was born May 18, 1912, to the late Albert and Hanora M. (McAvoy) Bockelman, in Cincinnati, Ohio and had been an Appleton resident since 1946. She married David E. Lamon, Jr. on October 8, 1936, he was formerly employed by Appleton Machine (Metso), where he was Vice-President of Engineering. Ellie loved taking care of her home, preparing meals on time, she was devoted to her family and concerned about others. She had been active at Sacred Heart Catholic Church, where she made vestments and helped with church and school activities. Ellie spent untold hours collecting recipes and had an extensive collection of cookbooks. She was a member of St. Bernadette Catholic Church. Survivors include three sons and daughters-in-law, David E. ‚ÄúDoc‚Äùand Diane Lamon, III, Appleton, (retired from Xavier High School); Steven and Annette Lamon, Sr., River Forest, IL; Thomas and Patricia Lamon, Conover, WI; nine grandchildren, Susan (Brian) Hlinak, Manitowoc; Catherine (Craig) Anderson, Glen Ellyn, IL; Patricia (John)Vanden Heuvel, Kaukauna; Mary (Stevens Smith) Lamon-Smith, Madison; Ellyse Lamon, River Forest, IL; Steven Mark Lamon, Jr., River Forest, Il; William Lamon, River Forest, IL; Adda Lamon, Conover; David E. Lamon, IV, Conover; 13 Great grandchildren; one sister-in-law, Frances Wichmann, Sun Prairie, WI. She was preceded in death by her husband, David E. Lamon Jr., on January 1, 2003, her brother Albert Bockelman, Jr. and her sister, Marie Mohr. The funeral liturgy for Ellen will be held at 11:30 am, Thursday October 13, 2005, at ST. BERNADETTE CATHOLIC CHURCH, 2331 East Lourdes Drive Appleton, with Father Donald Zuleger officiating. Burial will be in Three Lakes Cemetery. Friends may call at the church from 10:00 am, Thursday, until the time of the mass. In lieu of flowers contributions may be made to Alzheimer‚Äôs Research and the Oncology Unit of St. Elizabeth Hospital.

The family would like to thank the staff of Prairie Home for their loving care and support.