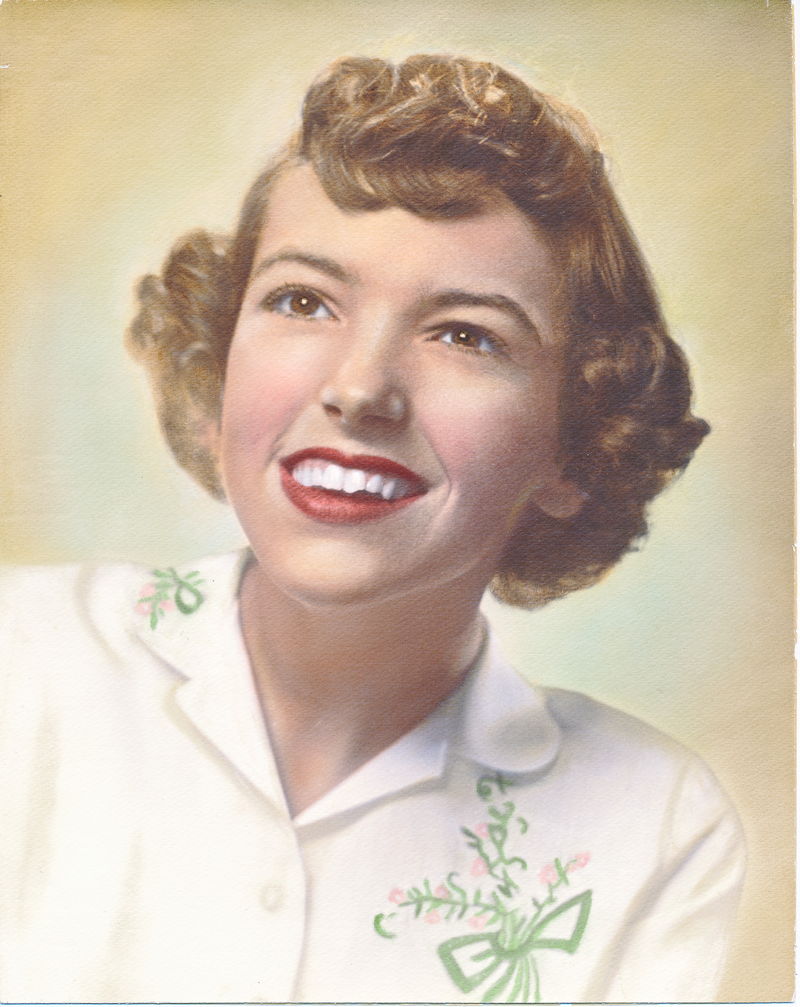 Ellen Kay Keller was born on March 14, 1941. She was called home to her Heavenly Father on Thursday, March 7, 2013. Kay was born with cerebral palsy and although disabled physically, she was alive and spirited with a great capacity to be a friend. The following was written by Kay and tells us how she valued her education and took pride in it.
Kay spent the first 30 years of her life as a parishioner of St. Mary's Church in Appleton. As there were no ramps at St. Mary's, Kay and her mother joined St. Bernard Church when Kay's youngest brother left for college and was no longer available to help Kay in to church. Kay later joined St Bernadette Church. Kay was involved in the Catholic Charismatic Movement for over 40 years.
Kay graduated from a high school in Milwaukee which was the only wheelchair accessible high school in the state. Her parents went through much red tape in order to access this education for her. Kay attended college at the Fox Valley Extension taking two classes per semester for four years. She began her first job at Goodwill Industries in Menasha in September 1968 where she worked for the next 18 years. Although thankful for the opportunity, none of the various jobs she held came close to challenging her intelligence. In 1985 her county social worker asked if she would like to consider volunteer work. Kay volunteered at St. Elizabeth Hospital typing four hours a week for the Director of Rehabilitation. She also volunteered at Americana Nursing Home typing for the Activity Director. Kay greatly enjoyed the many friends she made at these facilities. Later in the year, Kay began volunteer work at the YMCA. She began volunteering one day a week. Within a few months she had truly found her second home and volunteered there four days a week for the next 17 years. Everyone there treated her like everyone else and this warmed Kay's heart to no end.
Ellen is survived by four siblings and their children; Phillip and Lynne Keller and their children: Luke and Rachel; Judith Keller; Robert Keller and Kelly Fonner; and their son Jordan and fianc√© Megan ; and John Keller; other relatives and friends.
Kay was preceded in death by her parents.
The funeral liturgy will be held on Monday, March 11, 2013 at 11:30 AM at ST. BERNADETTE CATHOLIC CHURCH, 2331 E. Lourdes St., Appleton. A time of visitation will be held on Monday from 10:00 AM until the time of the Mass at the church. Online condolences may be expressed at www.wichmannfargo.com. In lieu of flowers, Kay's request was for donations to be made to: Trinity School at Greenlawn, 107 S. Greenlawn Ave, South Bend IN 46617; Easter Seals, attention Jull Gretzinger, 820 W. College Ave, Appleton, 54914; or to St. Bernadette.
The family would like to thank the staff of Agape for the love they showed Kay over the years that she lived with them. The people there are beyond any praise that we can offer.
Thanks to the People of Praise who were her friends and spiritual brothers and sister.
Thanks to Kelly Fonner, Kay's sister-in-law who made it possible for Kay to communicate with others in her last years.
A special thanks to Theda Care hospice, especially Jill and Erin for the wonderful care Kay received.
And finally, thanks to Dr. Lawrence and Dolores Keller who raised their daughter, just as all their other children, to be independent, strong and caring.