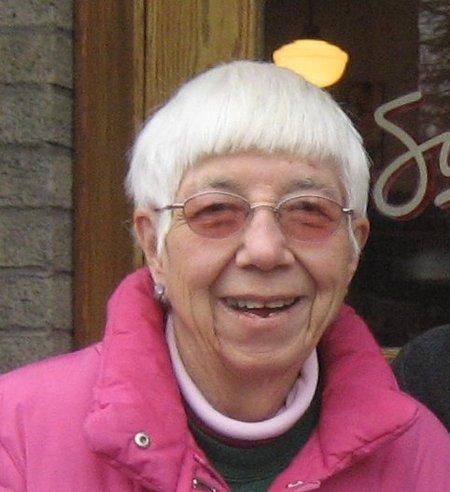 Elizabeth “Betty” Nimmer Jones, age 85, of Richton Park, Illinois, formerly Betty Nimmer of Kaukauna, Wisconsin, passed away peacefully on Sunday, July 3, 2011 at her summer residence in Hayward, Wisconsin. She was born on August 16, 1925 in Kaukauna, the daughter of the late William and Mary Klumb. On August 17, 1946 she married Kenneth Nimmer who preceded her in death on September 23, 1984. She married Ralph Jones on May 26, 1986 who passed on April 26, 2004.

After graduating from Kaukauna High School, Betty was employed for a short time at Thilmany Pulp & Paper Company as a secretary in the First Aid Department. Later, she managed the bookkeeping for the family business, Ken Nimmer Builder (previously known as Edwin C. Nimmer Builders) from 1957-1973. Betty was a legal secretary at McCarty Law Firm in Kaukauna from 1961-1973 and church secretary for Immanuel United Church of Church from 1957-1961. In 1974, Betty and Ken were commissioned at Immanuel United Church of Christ in Kaukauna to become the managers of Moon Beach UCC Camp in St. Germain, Wisconsin.

In her later years, Betty enjoyed spending time with her family and generally being “on the go” – cruising in the Caribbean, attending church activities, enjoying the camaraderie of her exercise class and making her annual trek up to Wolf Point in Hayward where she spent her summers in the north woods that was so dear to her heart. A woman of giggles, faith, courage and gentleness, she endeared herself to many by always remembering birthdays, being continually loving and supportive, asking little to nothing for herself and always praying with deep sincerity and endless gratitude.

The memorial service for Betty will be held at 11:00 am on Friday, JULY 22, 2011 at IMMANUEL UNITED CHURCH OF CHRIST, 510 Sullivan Avenue, Kaukauna. Rev. David Moyer will be officiating. Inurnment will take place at Union Cemetery in Kaukauna. The family will receive relatives and friends at the church from 9:00 am until the time of service. In lieu of flowers, memorials to Immanuel United Church of Christ or St. John's Faith Church, Matteson, Illinois are appreciated.