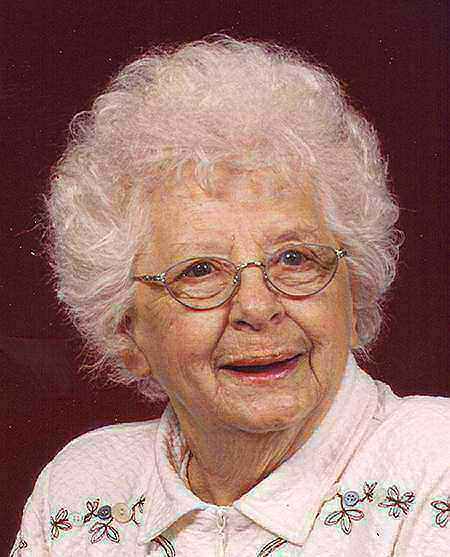 Elizabeth June Arnoldussen, age 80, passed away peacefully, Friday morning, March 26, 2004, at Fox River Assisted Living Facility, Appleton. Betty was born on June 5, 1923 in Appleton, daughter of Frank and Lorraine (Brill) Schrimpf. She attended Sacred Heart Grade School, Appleton High School (Class of ‚Äô41), and Bowlby‚Äôs Business College. Betty married Vernon J. Arnoldussen on May 11, 1946 at Sacred Heart Church in Appleton. They resided in the Appleton area most of their lives and were members of St Joseph‚Äôs Parish. She worked at Miller Electric for ten years before starting her family. As the family got older, Betty also became involved in the operation of two businesses, Vern & Harry‚Äôs Hillside Bar, and Vern & Betty‚Äôs Bar, both located in Kimberly, WI. After she ‚Äúofficially‚Äù retired, she and Vern moved to Shawano Lake, and eventually opened their home to the Annual Schrimpf Family Reunion.

Throughout her life, she was an avid Packer fan. She also enjoyed nature and the outdoors, fishing, boating, traveling, crossword puzzles, and occasional wrestling with the ‚Äúone-armed bandits‚Äù (a match were she frequently was the victor). But her greatest joy was the close interaction she had with her family. Betty enjoyed people, and people enjoyed her. She had a great sense of humor and a candidly honest view of the world that made her unique.

Survivors include a daughter: Laurie Field, Eau Claire, sons: Randy (Shirley) Arnoldussen, Stephen Arnoldussen, and Richard (Sue) Arnoldussen, and grandchildren: Jason and Sarah (fianc√©e Mike Madson) Arnoldussen, Alisa and Daniel Field, Andrew and Madeline Arnoldussen. She is also survived by a brother: Robert (Shirley) Schrimpf, sisters: Virginia ‚ÄúGinnie‚Äù Carew, and Ethel ‚ÄúTootie‚Äù Carew, along with numerous warmly loved nieces, nephews and friends.
Betty was preceded in death by her husband, Vernon ‚ÄúSonny‚Äù Arnoldussen.
The family would like to thank everyone that helped make Betty‚Äôs life wonderful and joyous, including the recent help of Dr. Sonya Eiben, Anita and Cindy at Dialysis Care. A special heartfelt thanks goes out to the management and ‚Äúcrew‚Äù of Fox River Assisted Living for the exceptional expression of love and caring they showed for Mom during her stay with them.