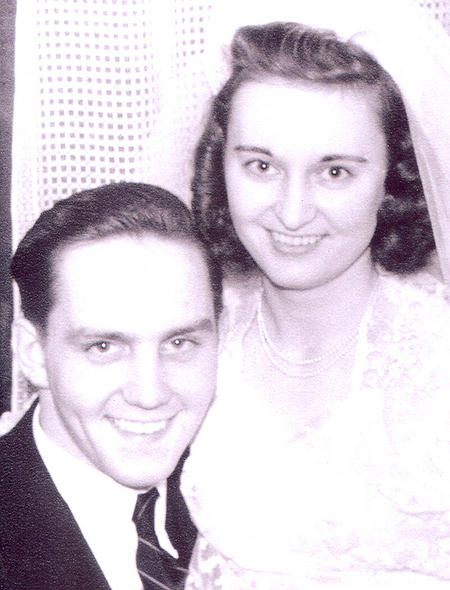 Elizabeth “Betty” Barbara Herrmann was called home to be with her Lord and Savior on Thursday, November 10, 2011.

Betty was born on November 28, 1915 in Greenville to Rev. Leonard and Elizabeth (Leisering) Kasper. Betty was baptized, confirmed and married at Immanuel Lutheran Church in Greenville by her father, who was the pastor there from 1913 to 1946. Betty graduated from Wisconsin Lutheran High School in Milwaukee on June 22, 1933. In May of 1934 she started working at the Aid Association for Lutherans (Thrivent) in the certificate department. On May 18, 1941 she was united in marriage to Charles “Pete” Junior Herrmann, the son of Charles and Alvina (Puls) Herrmann. After WW II, in which Pete served in the Army Air Corps as a Pilot of a B-17 bomber, Pete built their family home at 1916 N. Harriman St. in Appleton, where they raised six children and Betty lived until 2005. Pete preceded her in death on January 8, 1976. Betty was a member of Bethany Lutheran Church and was an active member all her life, singing in the choir, teaching Sunday School and was a member of the Ladies Aid.

The funeral service for Betty will be held on Monday, November 14, 2011 at 12:00 PM at BETHANY EV. LUTHERAN CHURCH (530 W. Parkway Blvd. Appleton) with Rev. Darin D. Aden officiating. Visitation will be held on Monday from 11:00 AM until the time of the service at the church. Interment will be in the Highland Memorial Park. The family would like to thank the staff at Bethany Home in Waupaca for their compassionate care.

Betty's confirmation verse was: The Lord will rescue me from every evil attack and will bring me safely to his Heavenly Kingdom, to Him be the glory for ever and ever. Amen. II Timothy 4:18