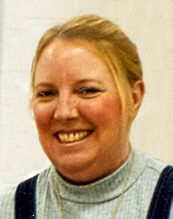 Elizabeth McDaniel, age 54, of Kaukauna, passed away on Friday, September 28, 2012 at Appleton Medical Center. She was born on August 10, 1958, in Kaukauna, the daughter of James and Jeanette (McGrath) Siebers. Beth enjoyed dancing, and loved her family and grandchildren.

She is survived by her daughter: Stephanie (Kris) VerVoort; granddaughters: Morgan and Lydia; mother: Jeanette Siebers; grandmother: Hilda McGrath; brothers: Terry (Kathy) Siebers; Tim (Kay) Siebers; Tom (Julie) Siebers; and Ted (John) Siebers; nieces and nephews: Dana, Steve, and their mother, Kim; Nikki and Kristy; and J.D. Beth is further survived by other relatives and friends. She was preceded in death by her father, James Siebers, and her paternal grandparents.

A time of sharing will be held at 7:00 pm on Monday, October 1, 2012 at the Fargo Funeral Home. The family will receive relatives and friends from 4:00 pm until the time of service. Online condolences can be expressed at www.wichmannfargo.com.

Special thanks to all the ICU and Oncology nurses at Appleton Medical Center for the compassion and care shown to our family. Also, Father Gerald Falk for the prayers and guidance during the last week.