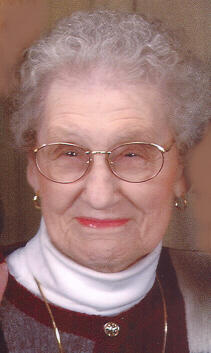 Age 96, passed away at Parkside Care Center in Little Chute on Monday, August 2, 2010. She was born in the Town of Black Creek on October 8, 1913, the daughter of the late Nicholas and Theresa (Heigl) Helein. On January 29, 1933 she married her husband of 64 years, Leonard Van Toll, in Black Creek. He preceded her in death on November 12, 1998. Elenora attended a one room school house in Black Creek. She was employed as a nurse?s aid at Appleton Extended Care, but will be remembered for being a wonderful homemaker. Elenora was fond of playing sheephead, bingo, and gardening. She was a wonderful cook and made many deserts that the grandchildren were eager recipients of.

The funeral service will be at 12:30 p.m. Wednesday, August 4, 2010, at Jansen Fargo Funeral Home, with Sr. Annette Koss officiating. Friends will be received at the funeral home on Wednesday from 10:30 a.m. until the time of the service. Burial will be in Holy Name Cemetery.

The family extends a special thank you to the staff at Parkside Care Center and Theda Care at Home Hospice for their kind care.

A memorial fund in Elenora?s name is being established.