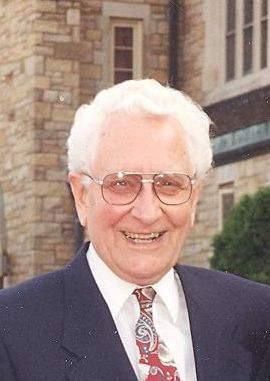 Eldred “Butch” Arthur Koschmann, age 92 of Oshkosh, went to be with his risen Savior early Easter Sunday morning. He was born on July 2, 1920 in Wausau, the son of Arthur and Selma Koschmann. He married the former Mildred Schield on June 10, 1944 in Merrill. He served as an accountant for Marathon Corporation and ultimately American Can Corporation for forty-two years. He loved fishing with his children and grandchildren, golf, and all spectator sports, but watching his Green Bay Packers with family was tops on his list.

Funeral services will be held at 11:00 a.m. on Thursday, April 4, 2013, at GOOD SHEPHERD LUTHERAN CHURCH, 2450 W 9th Avenue, Oshkosh. Pastor David Paape and Pastor Roger Erdman will be officiating. A time of visitation will be held at church from 10:00 a.m. until the time of service. In lieu of flowers, donations to the Good Shepherd Lutheran Church or Multiple Sclerosis Society would be appreciated. The family would like to extend special thank you to the caring staff at Rennes Health and Rehab Center.

Butch was a beacon of morality and Christianity for his loving family, and he will be dearly missed.