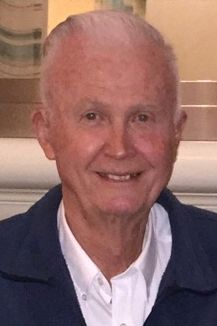 Elden L. Carlson, Appleton, and formerly of Naples, FL, passed away on August 30, 2018 after a courageous year-long fight against cancer.

Elden was born on December 20, 1935, to Oscar and Ruth Carlson of Oakland, Nebraska. He was the oldest of three brothers.

Elden worked for Continental Can Company for his entire career, which led the family across the Midwest. He was able to retire at an early age and follow his dreams of traveling and seeing many places around the world.

He was passionate about his sports and hobbies and enjoyed a wide variety of athletic activities, including fishing, hunting, golf, and tennis. He was also a decorated skeet and sporting clay shooter. Elden was also a well-known trick shooter and specialized in “shooting from the hip.” He enjoyed watching football, especially the Nebraska Cornhuskers and the Green Bay Packers, and his grandson’s soccer games. One of his great pleasures was going on walks with his beloved grand dog Daisy.

A memorial visitation will be held on Friday, September 7th at Jansen Fargo Funeral Home, 204 E. Kimberly Ave, from 4:00PM to 6:00 PM. Funeral services at 6:00 PM. Elden will be laid to rest privately at a later date. Come as you are to celebrate this wonderful man; please do not feel the need to dress up.

I want my family and friends to know that I love them and wish them well. I am going to a better place to be with the Lord. Thank you Jesus for your sacrifice to allow me a place in heaven. -Elden