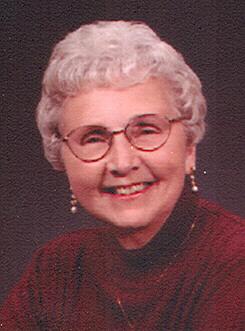 Elaine M. Wright, age 72, of Combined Locks, died suddenly, Wednesday afternoon, May 10, 2006. She was born October 2, 1931, to the late Casper and Gertrude (Simonis) Balthazor, in Bear Creek and had been a resident of Combined Locks since 1960. Elaine married Walter Wright, Jr. on April 16, 1952; he preceded her in death on September 28, 1995. She had been employed by Kaukauna Klub Cheese, retiring in 1992. Elaine enjoyed walking her dog, Penny, needlework, crocheting, caring for her flowers and watching movies. She was a member of St. Paul Catholic Church, where she helped those who had experienced a loss. Survivors include three sons, Gary (Carol) Wright, Kaukauna; Timothy (Cindy) Wright, Appleton; Wayne (Sharon) Wright, Appleton; seven grandchildren, Gregory, Dana, Troy, Andrew, Alyssa, Zoe and Abbe Wright; three great grandchildren, Raeleigh, Hunter and Samantha; two brothers, Helarian (Dorothy) Balthazor, Royalton; Norman (Betty) Balthazor, Bear Creek; three sisters, Marcella (John) Guyette, Clintonville; Carol (Tom) Rebman, New London; Donna (Jerold) Jenkins, New London; a brother-in-law, Harold Schweitzer, Bear Creek; two sisters-in-law, Jeanne Bathazor, Green Bay; and Donna Balthazor, New London. She was preceded in death by two brothers, Dennis Balthazor and Samuel Balthazor and two sisters, Janice Balthazor and Rita Schweitzer. The funeral liturgy for Elaine will be held at 11:00 am, Monday, May 15, 2006, at ST. PAUL CATHOLIC CHURCH, 410 East Wallace Street, Combined Locks, with Father Jim Lucus officiating. Burial will be in St. Paul Cemetery, Combined Locks. Friends may call at the funeral home on Sunday from 4 to 8 pm and on Monday at the church, from 10:00 am, until the time of the mass. There will be a parish prayer and scripture service at 7:30 pm, Sunday. A memorial fund is being established.