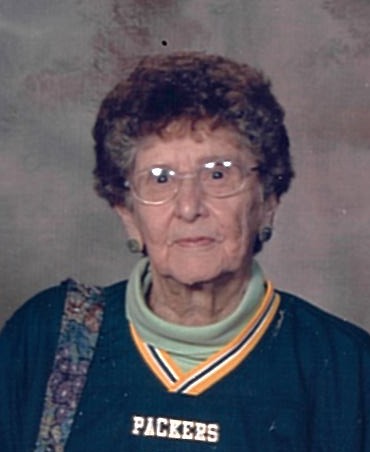 Elaine M. DeGrave, age 94, passed away on Sunday, February 24, 2019. She was born on September 26, 1924 in Chicago, IL, the daughter of the late Joseph and Elizabeth (Thielen) Simon. Elaine married David DeGrave on September 6, 1947, and they relocated to Kaukauna soon thereafter. Elaine was a long-time, loyal member at St. Aloysius Catholic Church in Kaukauna and spent many years volunteering there. She enjoyed hunting and fishing with her family. Family was everything to Elaine, and after her husband passed, she took her mother into her home to care for her until her passing. Later, Elaine would move in with her daughter in Greenville, where she lived and was cared for until her passing. Later in life, Elaine enjoyed crosswords and trips to the casino.

She was preceded in death by her husband, David DeGrave; parents, Joseph and Elizabeth Simon and her brother, Joseph Simon.

Private services for Elaine have been held.

The family wishes to thank the nurses and staff at Rennes Health and Rehab Center and Affinity Hospice for the care given to Elaine.