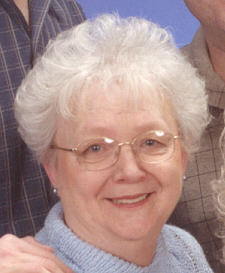 Age 66, passed away peacefully at her home on Wednesday, May 11, 2005. She was born April 9, 1939 in Clintonville the daughter of the late Albert and Christine (Johnson) Schmidt. Elaine married Lloyd Miller on August 22, 1959 in the Town of Union, Waupaca County. Bunny and her husband Lloyd owned and operated Miller‚Äôs T.V. & Appliance in Kimberly for 22 years. She was a member of Mount Calvary Evangelical Lutheran Church. Bunny was employed for 18 years at Appleton Medical Center in ICU. She was an avid bunny collector.

The funeral service will be at 11 a.m. Saturday, May 14, 2005 at MOUNT CALVARY EVANGELICAL LUTHERAN CHURCH, N8728 S. Coop Rd., Appleton with Rev. Virgil Hanson officiating. Burial will be in Symco Cemetery. Friends may call at the Jansen-Fargo Funeral Home from 4:00 until 8:00 p.m. on Friday and after 9 a.m. on Saturday at Mount Calvary Ev. Lutheran Church until the time of services. A memorial fund has been established in her name.