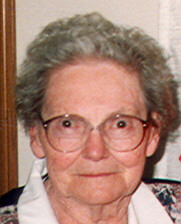 Elaine A. Van Vreede, age 90, died Saturday morning, November 25, 2006. She was born January 22, 1916, to the late Francis and Mary (Rozmairek) Foley, in Seymour and had been a Freedom resident most of her life. She and her husband Alois Van Vreede farmed in the Town of Kaukauna for over 25 years. Elaine was also a schoolteacher, having taught at Cherry Brook and Sunny Corners Schools. She enjoyed gardening, sewing and helping at church. She was a member of St. Nicholas Catholic Church and the Christian Mothers. Elaine is survived by 12 children, Daniel (Cathy) Van Vreede; Donald Van Vreede; Janice (Matt) Knapp; Carol (LeRoy) Hietpas; Donna (Gary) Sauby; Diane (Richard) Benz; Lyle Van Vreede; Linda Fischer; Pat (Dave) Rasmussen; Gary (Sue) Van Vreede; Mary (Edward) Balcerak; Lee (Stephanie) Van Vreede; many grandchildren and great grandchildren; two brothers, Robert (Rose) Foley; Reverend Gerald Foley; a brother-in-law, Carl Van Vreede; three sisters-in-law, Margaret Foley, Catherine and Lorraine Van Vreede and Mary Weyers. She was preceded in death by her husband, Alois Van Vreede, a daughter Mary Lou, two brothers, Harold and Raymond Foley, a daughter-in-law, Alice Steffens, brothers-in-law, Victor, Floyd and Harvey Van Vreede and William Weyers sisters-in-law, Marie Foley, Margaret and Helen Van Vreede and Georgiana Weyers. The funeral liturgy for Elaine will be held at 5:45 pm, Tuesday, November 28, 2006, at ST NICHOLAS CATHOLIC CHURCH, N4088 County Trunk E, Freedom, with her brother, Father Gerald Foley officiating. Burial will be in St. Nicholas Cemetery. Friends may call at the church on Tuesday, from 3:00 pm until the time of the service. In lieu of flowers a memorial fund is being established.

The family would like to extend their gratitude and thanks to the staff of St. Paul Elder Services.