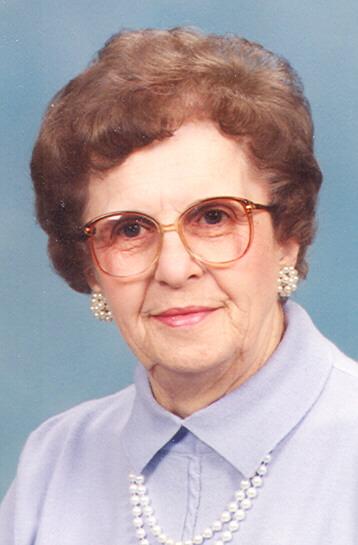 Age 83, formerly of Appleton, passed away Thursday, June 14, 2007, at the Wisconsin Veterans‚Äô Home in King.

Eileen was born February 2, 1924, in Seymour, the daughter of Arnold and Louise (Wichmann) Muenster. In her childhood years she lived and helped on her family‚Äôs farm.
Following high school, Eileen enlisted in the United States Navy, and during World War II was stationed in San Diego. Returning to Wisconsin, she met and was united in marriage to Jack Belling on September 2, 1947. He preceded her in death in October of 1974.
Mrs. Belling was a bookkeeper for Accurate Alignment and Hoffman Drug, and later was employed for many years as a seamstress for Farah‚Äôs Custom Sewing Shop. She enjoyed her local bowling league and nights out with the girls. She participated in state and national levels of bowling tournaments as well. Her interests included knitting and sewing, needlepoint, and other hand crafts.

Funeral services for Eileen will be at 1:00 p.m. Sunday, June 17, 2007, at WICHMANN FUNERAL HOME, TRI-COUNTY CHAPEL. Visitation will be from 10:00 a.m. Sunday until the time of services at the funeral home. Interment will be in Appleton Highland Memorial Park. Memorials in Eileen‚Äôs name may be sent to the Wisconsin Veterans‚Äô Home, Stordock Hall, N2665 CTH QQ, King, WI, 54946.