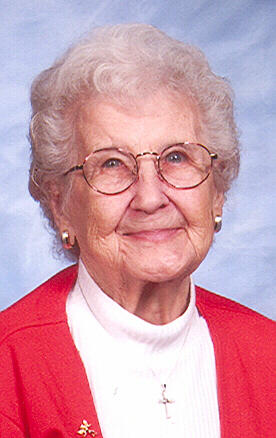 Age 91, went to see her Lord and Savior on Saturday, June 5, 2010. She was born in Naper, NE on December 8, 1918, the daughter of the late Herman and Hilda (Rasch) Seevers. She was baptized and confirmed in the Christian faith and on July 14, 1943, she married Ernest Cunningham in Milwaukee. He preceded her in death in 1981. Eileen worked for many years as a cook at the Cotton Patch in Shawano. She was known for her selfless, caring attitude and will be truly missed.

The funeral service will be at 11:00 a.m. on Tuesday, June 8, 2010, at MOUNT OLIVE EV. LUTHERAN CHURCH, 930 E. Florida Ave., Appleton, with Rev. Robert Raasch officiating. Friends will be received at the church on Tuesday from 9:30 a.m. until the time of the service. Burial will be at 3:00 p.m. in Lake Drive Cemetery, Shawano.

The family extends a special thank you to the staff at Carolina Manor for their loving care.