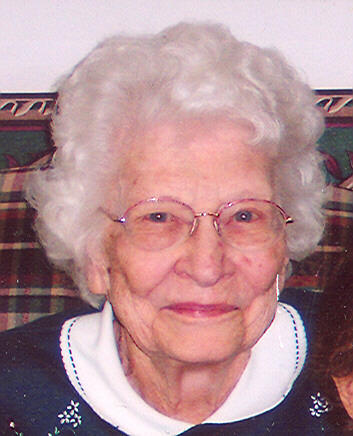 Effie C. La Plante, age 94, passed away Tuesday, June 23, 2009 at Appleton Retirement Community. She was born on a farm near Thorp, WI on December 17, 1914 to the late Robert and Rose (Sutter) Bohren. On May 31, 1941, she married Joseph M. La Plante. They moved to Sturgeon Bay in 1952. Effie worked at Eurena's Beauty Salon for many years and was a Sunday school teacher at the Methodist church. After retiring, Effie volunteered her time as a beautician to many hospital and nursing home patients. She was a humble woman who enjoyed knitting, sewing, reading and playing cards. She is survived by her three children, Pierre (Laurie) La Plante, Oregon, WI, Yvonne (Gary) Miller, Appleton, WI and Renee (Hugh) Cain, Cedar Rapids, Iowa; seven grandchildren, 12 great-grandchildren; one sister, Alice (Keith) Moderson and a brother, Eugene Bohren. She was preceded in death by her husband Joseph, four brothers and one sister. Funeral services for Effie were held on Friday, June 26, 2009 at Wichmann Funeral Home in Appleton. Inurnment will take place in Bayside Cemetery in Sturgeon Bay at a later date. A memorial fund is being established in her name.

Effie's family would like to say a special thank you to the staff at the Appleton Retirement Community for the loving care she received these past seven years.

Mom and Grandma, you were a special gem that God made to shine for Him.