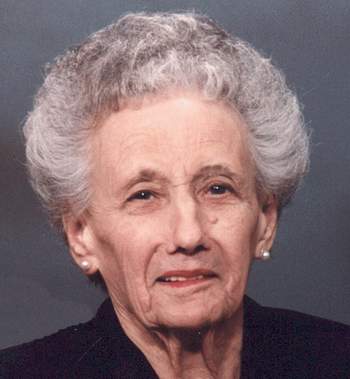 Age 86, passed away peacefully on Thursday, July 8, 2004 at St. Paul Villa in Kaukauna. Edwina was born August 21, 1917 in Niagara, Wisconsin, daughter of the late Edward and Aldora (Dufresne) Olive. On May 19, 1936, she married Charles Schumann; he preceded her in death in 1978. Eddie was the first woman hired at Thilmany Pulp & Paper in Kaukauna, and worked there for over thirty years in a variety of positions. Many will remember Edwina for her love of playing cards, and dancing and ice skating in her younger years.

The funeral liturgy will be held at 11:00 AM on Tuesday, July 13, 2004 at HOLY CROSS CATHOLIC CHURCH, 309 Desnoyer Street in Kaukauna, with Fr. Matthew Settle officiating. Inurnment will be in the parish cemetery. Friends may call directly at the church on Tuesday from 9 AM until the hour of the liturgy.

The family would like to extend their gratitude to ThedaCare At Home and to the entire staff at St. Paul Villa for the wonderful care given to Eddie. Thanks also to Sr. Rose fand Fr. Dave for their daily prayers, as well as to all of Eddie's friends and neighbors at the Villa for your many kind thoughts and visits; and a special thank you to Eddie's good friend, Butch. Thank you all for everything you have done for us.