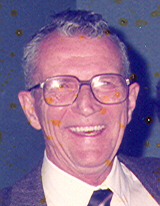 Edward J. Gerrity, of Appleton, at the age of 84, kept his appointment with death on Monday morning, January 7, 2008. He was born October 23, 1923, in Centralia PA and spent most of his first 18 years living in Mt. Carmel, PA. After graduating from high school he lived in Jersey City, NJ and worked in New York City. Ed enlisted in the U. S. Army on Thanksgiving Day, 1942 and was called to active duty in June, 1943. He proudly served in the 100th Infantry Division in France, Germany and Austria. Ed was captured in Heilbron, Germany and was liberated in Hof, Austria. He was honorably discharged in 1945 and was awarded the Good Conduct Medal, Purple Heart, Regular Infantry Badge and Combat Infantry Badge, Bronze Star and Presidential Unit Citation, with three clusters. Ed married Marian Hildebrandt on November 24, 1945, in Appleton and had four children. He spent most of his working years in the transportation field and represented companies in Washington, DC, Chicago, IL, Kansas City, MO and Madison, WI. Ed did work for 80 different motor carriers from 5 different states and was also an ICC Practitioner. He joined the Oney Johnston-Edward Blessman American Legion Post #38 in 1960. Ed loved to play golf and watch football games, especially Notre Dame games. He is survived by three children, Michael (Eileen) Gerrity, Mackville; Kathleen (Steve) Belair, Marietta, GA; Timothy (Sarah) Gerrity, Appleton; seven grandchildren, Tara (Brandon) Bailie, St. Paul, MN; Trevor Gerrity, Minneapolis, MN; Heather (Rob) Ludlam and Ryan (Cheryl) Belair, Georgia; Jenni (Jim) Snodgrass and Lucas Meyer, Knoxville, TN; Ian Gerrity, Appleton; four great grandchildren, Morgan Bailie, Ella Bailie, Ava Ludlam and James Snodgrass. He was preceded in death by his wife, Marian (Hildebrandt) Gerrity, on September 14, 2007 and his daughter and son-in-law, Julie and Bob Meyer. A celebration of Ed's life will be held at 10:30 am, Thursday, January 10, 2008, at St. Joseph Catholic Church, 410 West Lawrence Street, with Father Larry Abler officiating. Burial will be in St. Joseph Cemetery. Friends may call at the church on Thursday from 9:00 am until the time of the mass. A memorial fund is being established.