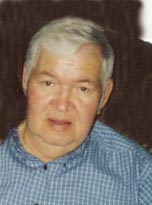 Ed Van Den Bloomer, age 62, passed away April 1, 2006 surrounded by his family from injuries sustained in a fall. He was born May 30, 1943 in Kaukauna, son of the late Albert and Josephine (Skinadore) Van Den Bloomer. Edward married Mary Buchberger on February 11, 1966 in Marinette. Ed enjoyed playing pool, bowling, fishing, painting, going for rides and going out to eat. He loved feeding and watching the birds and squirrels. Ed enjoyed helping his son with his landscaping business. His pride and joy was his wife, family, children and grandchildren. He will be remembered by all who knew his as a very caring person in helping the elderly and neighbors.

The funeral liturgy for Ed will be held at 5:00 pm on Wednesday, April 5, 2006 at HOLY CROSS CATHOLIC CHURCH, 309 Desnoyer St., Kaukauna with Fr. Martin Fox officiating. Interment will take place at Holy Cross Cemetery. Friends may call at the CHURCH on Wednesday from 1:00 pm until the time of mass. In lieu of flowers, a memorial fund has been established in Ed‚Äôs name.