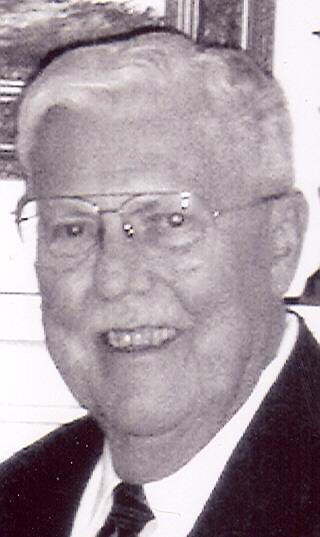 Age 79, formerly of Milwaukee, Wisconsin, son of the late Frank and Anna (Zengraf) Uehlein, brother of the late Arthur Uehlein, was called to his heavenly home on Monday, December 20, 2004, after a prolonged struggle with cancer.
He is survived by his beloved wife, Ann (Cotter) Uehlein; three daughters, Judy (Jon) Nelson, of Victoria, Australia, Nancy (Tom) Proctor, of Nashotah, Wis., and Susan (Dr. Michael) Woods, Oconomowoc, Wis.; four stepchildren, Michael (Wanda) Vandenberg, of Kaukauna, Wis., Kevin Vandenberg, Marshfield, Wis., Rebecca (William) Kasper, Ripon, Wis., and Ellen Vandenberg, Neenah, Wis.; there are 14 grandchildren, Scott and Jennifer Nelson, Ted, Jim, and Danielle Proctor, Nick, Peter, Max, and Sarah Woods, Michael and Alex Vandenberg, Sam, Theresa, and Caleb Kasper. Ed is further survived by his brothers-in-law, Father Pius Cotter, O.F.M. Cap., of Brussels, Wis., and James A. (Mary) Cotter, of Appleton. And his sisters-in-law, Mary Peterman, of Kingwood, Texas, Therese (Irvin) Benard, of Saratoga, Calif., and Lois (Tom) Shandonnay, of Neenah.
Ed was born in Milwaukee, Wisconsin, and attended St. Ann's grade school, Messmer and Washington High Schools. In 1943, Ed entered the Naval officer training program at the University of Wisconsin, Madison, and later transferred to the Navy ROTC program at the University of Minnesota. He subsequently graduated with a Naval Engineering degree. In 1946, he again attended the University of Wisconsin, Madison, and he received his degree in Mechanical Engineering. He was then assigned to further naval engineering at Newport, R.I., and assigned to the destroyer escort ship, the USS Fogg, and served duty as an engineering officer until retiring from the Navy on reserve status. Upon graduating with a master's degree in engineering and a degree as Professional Engineer as USNR officer, engineering school-diesel and hydro-electrical power and assistant officer in the US Naval Reserve.
In civilian life, Ed returned to the University of Wisconsin in Madison for further studies and accepted a full-time teaching position at the UW Department of Engineering. He joined the corporate staff as senior design officer from 1948 until 1953 at the Scott Paper Company, Chester, Pennsylvania. In 1953, he transferred with Scott Paper to Marinette, Wis. In 1955 he lived in Mobile, Alabama working for Scott Paper Company. In 1958 he accepted a position with International Paper Company, Kaukauna, Wisconsin, as manager of engineering services for design engineering department, maintenance department and administration of annual capital budget, consultant and construction services. At the time of his death, he was working as a consultant professional engineer for Marshfield Steel, Marshfield, Wis., on an on-call basis.
Ed was a member of the Kaukauna Rotary Club and was on the Board of Directors for 28 years for East Wisconsin Savings Bank. He was a past volunteer for Outagamie Huber Law and served on the Industrial Engineering Advisory Board for Fox Valley Technical College. Ed was a past member of All Saints Episcopal Church and at the time of his death was a member of St. Joseph Catholic Church, Appleton. Ed was an accomplished artist, and was a past member of the Appleton Gallery of Arts. He enjoyed to travel, loved fishing, and enjoyed his cottage with family and friends. Ed was an avid reader and a true "gentle man". He will be missed very much by his wife Ann, children, stepchildren, grandchildren, and his many friends.
Ed was a spiritual man, quietly walking the journey to his Lord and Savior through prayer and good works, believing that there was always a greater place beyond this life. To sum up Ed's life would be the saying, "A man is loved not for how tall he stands but for how often he bends to help, comfort, and teach".
The Mass of Christian Burial will be conducted on Friday, December 24, 2004 at 10:30 AM at ST. JOSEPH CATHOLIC CHURCH, 410 West Lawrence Street in Appleton, with the Rev. Pius Cotter, O.F.M Cap., main celebrant, and Revs. Larry Abler, John Holly, and Ken Reinhart, O.F.M. Caps., concelebrating. Interment will take place at St. Mary Catholic Cemetery in Appleton. Friends may call at the Wichmann Tri-County Chapel on Thursday from 3-7 PM and at the church on Friday from 9:30 AM until the time of the Mass. Parish Prayer and Scripture Services will be at 7:00 PM at the funeral home on Thursday. In lieu of flowers, a memorial fund is being established.
Ed's wife and family would like to extend a grateful and heart-felt thank you to all family, friends, neighbors, the oncology staff at AMC, ThedaCare Hospice, and clergy for all your care and concern. There are numerous people to extend this thank you, however, all of you who knew and loved Ed, know that you will always be in our hearts. We only wish there was the space to mention you all by name.