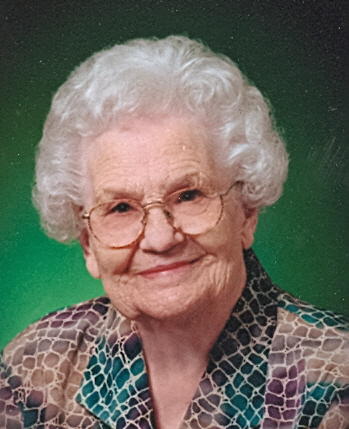 Edna Howard, age 97, of Kimberly, passed away at the home of her daughter, Karen Howard, on Monday, September 14, 2009. She was born in the Town of Lawrence on March 15, 1912, the 7th child of 17 children to the late Gustav and Emma (Kersten) Erdmann. On March 30, 1937, she married Charles Howard at St. John's Evangelical Lutheran Church in Wrightstown. Edna worked at Fox River Knitting Mill for many years and then helped with their farm produce stand. She enjoyed embroidering, taking care of her flowers, playing cards and spending time with her grandchildren and great-grandchildren.

Edna's family extends much gratitude to Dr. Michael Werner and the staff at Kaukauna Clinic and Mary, Claudia, Ida, Tricia and Sue of ThedaCare at Home Hospice who treated her with such gentleness and dignity.

A Funeral Service for Edna will be held at 5:00 p.m. on Thursday, September 17, 2009, at Christ the King Lutheran Church, 601 S. Washington Street, Combined Locks, with the Rev. Bill Schroeder and the Rev. Tim Krick officiating. Friends may call at the church on Thursday, from 3:00 p.m. until the time of service.

A memorial fund for Edna has been established.