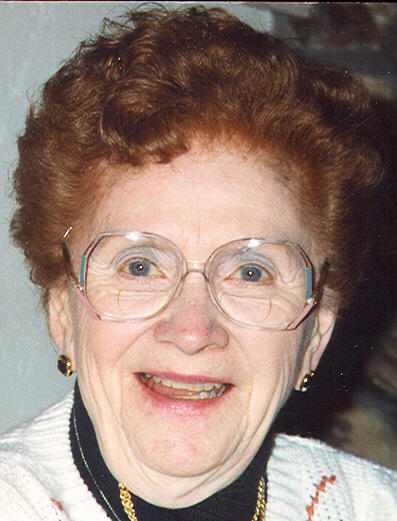 Edna Norstrom, of Appleton, age 98, passed away on July 19, 2008 at Brewster Village. She was born on November 8, 1909 in Gladstone, Michigan, to the late Constant and Leona Van Daele. Edna married Ole Norstrom on June 21, 1938 in Escanaba, Michigan; he preceded her in death in 1975. For many years she and Ole operated Chrysler dealerships in Gladstone and Escanaba. Ole proudly served his country during World War II in the United States Army Air Corps as a flight instructor. They lived in Arizona until he was transferred overseas; Edna then returned to Gladstone. Edna and Ole moved to Appleton in 1947. Together they operated the G.I. Bill Flight School at the old Appleton Airport. Upon their retirement, they build a home on Douglas Street; Edna lived there until her death.

Edna was a longtime member of Trinity Lutheran Church, Appleton. She was also a member of Butte Des Morts Country Club for many years, enjoying bridge and the company of her friends.

The funeral service for Edna will be held at 11:00 am on Tuesday, July 22, 2008 at TRINITY LUTHERAN CHURCH (209 S. Allen Street, Appleton) with Rev. Kurt Kovanen officiating. Interment will be in Fernwood Cemetery, Gladstone, Michigan. The visitation will be held at the church on Tuesday from 10:00 am until the time of service.

The family would like to extend a sincere thank you to Home Instead for their care while Edna was home. A special thank you to Mary Schumacher, her loving and devoted care was greatly appreciated. Thank you to the wonderful staff at Brewster Village.