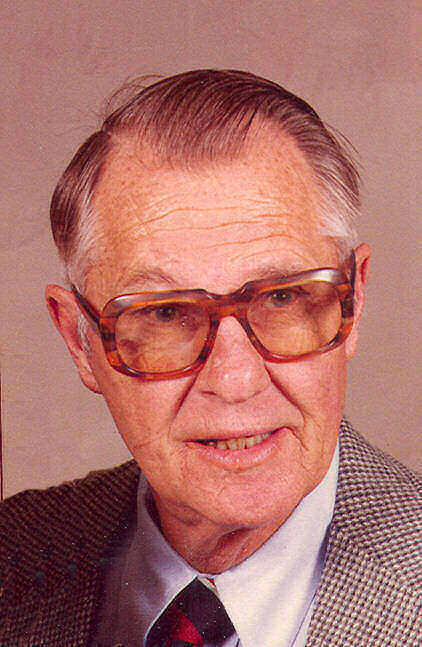 Edmund J. Laue
Edmund J. Lau, 98, of Appleton, died peacefully Sunday, February 7, 2010 at the Heritage Woods Retirement Center, Appleton, Born in Chicago on March 10, 1911, he was the son of Ernst and Ida Rahn Laue and had three sisters and a brother, all deceased.
His wife of 69 years, Martha P. Laue, died in 2002.
Mr. Laue is survived by two daughters: Sandra (David) Miller, Sherwood, and Lynn (Robert) Rubright, St. Louis, Missouri, as well as five grandchildren: Jane (Joe) Dias, Neenah; Molly (Troy) Mueller, Menasha; Josh Miller, Black Creek and Daniel and Theodore Rubright, both of St. Louis. Great-grandchildren include Cody, Ty and Jordan Dias, Brady Mueller, Alex Miller and Aidan and Ross Rubright.
Mr. Laue retired in 1978 as Co-founder and Vice President of Badger Packaging Corporation, Kewaskum, Wisconsin. The company has manufactured custom-designed corrugated fibreboard containers since 1965. He and his wife resided in West Bend during his work with Badger Packaging. The couple lived in Appleton during their retirement years.
Earlier he was a National Sales Representative for Inland Container Corporation, Chicago, as well as a Sales Executive for Reynolds Metals in Akron, Ohio. During World War II, Mr. Laue was a Military Packaging Specialist for government contractor, Forest Products Laboratories, Madison, Wisconsin.
In 1948 Mr. Laue became Chief Packaging Engineer for the Lustron Corporation in Columbus, Ohio. The “Lustron” was a five-room steel porcelain enamel home that was delivered with all of its 4, 000 parts on trucks and long flatbed trailers. “The entire house could be packaged in conventional corrugated fibreboard boxes,” Mr. Laue wrote in a 1949 trade magazine. Total cost of packaging and loading each 25, 000 pound home was (in 1949 dollars) $100, he added, stating that the Lustron home was then “America's biggest line-produced package.”
Mr. Laue was an active golfer well into his 80s; he as also an accomplished swimmer still logging miles in the pool well into his mid 80s. Early in the Depression of the 1930's, when jobs were difficult to find, he competed with thousands of young people for the coveted position of Lifeguard on the beaches of Lake Michigan near downtown Chicago. He was one of the select few hired.
A visitation has been scheduled for 9:30 am with a memorial service following at 11:00 am on Monday, February 15, 2010 at Christ the King Lutheran Church, N7510 Highway 55/114 in Sherwood. In lieu of flowers, memorials can be directed to Christ the King Lutheran Church in Sherwood or the Wisconsin Talking Books and Braille Library, 813 W. Wells Street, Milwaukee, WI 53233-1436.
The family would like to thank the staff and caregivers of the Heritage Woods Retirement Center for their many years of loving and respectful care of Ed. We sincerely appreciate that right to the very end his dignity was honored. Additionally, the family would like to thank the staff and volunteers of ThedaCare Hospice who's care of Ed and counseling and support his family resulted in a peaceful end of life experience.
Wichmann Funeral Home
537 N. Superior St.
Appleton 739-1231
Online Condolences
www.wichmannfargo.com