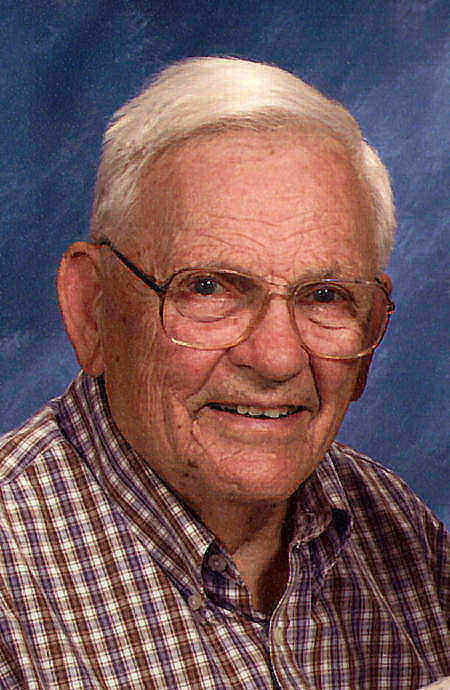 Edmund H. Grassl, age 89, passed away at Cherry Meadows on Friday, September 10, 2010. Ed was born September 2, 1921, in Appleton, to the late Joseph and Mary (Giesbers) Grassl. Edmund (Ed) was a life long resident of Appleton. He married Patricia Zapp on September 5, 1953 at St. Therese Catholic Church, and worked for Valley Iron Works (later to become Allis-Chalmers) and then for Appleton Public Schools until he retired. Ed was a loving and caring husband and father. He was an excellent bowler and loved tinkering in his basement and garage. He took pride in his garden and was an avid Cub and Packer fan.
Ed is survived by his loving wife of 57 years, Patricia Grassl of Appleton; four children, James (Carol) Grassl of Combined Locks, Gary (Lisa) Grassl of Appleton, David Grassl of Appleton, and Thomas (Stacy) Grassl of Appleton; four grandchildren, Joseph, Brittney, Jared, and Shayna; two step-grandchildren, Doug (Tammy) and Dustin (special friend Amy); two step-great-grandchildren, Jadon and Landon; a sister, Leona Trask of Bend, Oregon; and two sisters-in-law, Betty Grassl of Appleton and Bonnie Zapp of Appleton; there are also many nieces and nephews, other relatives and many friends.
He was preceded in death by his parents; his brother, Elmer Grassl; sisters, Evelyn Barnetzke and Virginia (Earl) Zuehlke; and brothers-in-law, Roger Trask, Jerry Zapp and Willard Zapp.
Funeral services for Ed will be held on Monday, September 13, 2010 at 11:00 a.m. at SACRED HEART CATHOLIC CHURCH, 222 E. Fremont Street, Appleton, with Fr. Robert Karuhn officiating. Interment will be at St. Joseph Cemetery. Friends may call Monday at church from 9:30 a.m. until the time of the mass.
The family would like to extend a sincere thank you to Manor Care, Heartland Hospice, Right at Home, Cherry Meadows, and the nursing staff at St. Elizabeth Hospital for their compassion, care, and support.

Dad, even though it's difficult to say goodbye, we know we'll see you again one day. Until then, know how much we love you.

– Ma, the boys, and the rest of your loving family.