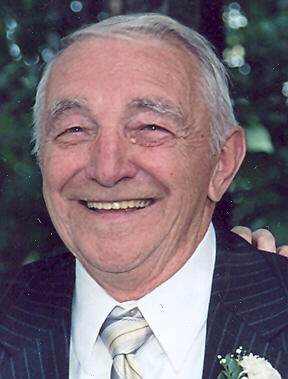 Dutch graduated from Appleton High School in 1945 and joined the Navy. He married Gail Harvath on February 5, 1949 and resided in Appleton and belonged to Sacred Heart Catholic Church. He worked at Kimberly-Clark as an electrician for 40 years and retired in 1987.

He liked golf and going out for Friday fish and having a couple of beers. He enjoyed going to the cottages and all the fun that goes with it. Dutch loved it when his family would visit him. He was the best husband, father, grandfather, and great-grandfather anyone could ever ask for. He will be greatly missed.

The funeral liturgy will be at 12:00 p.m. on Saturday, December 18, 2010 at SACRED HEART CATHOLIC CHURCH, 222 Fremont St., Appleton, with Fr. David Kelly officiating. Friends will be received at the church on Saturday from 10:00 a.m. until the time of the service. Burial will be in St. Joseph Cemetery, Appleton.

The family would like to express their thanks and gratitude to ThedaCare Hospice specifically Katie, AMC Oncology personnel, and special neighbors Bob and Donna Stanek.

A memorial fund in Dutch's name is being established.