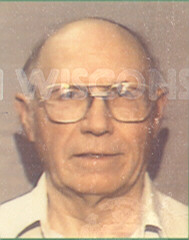 Edgar Kapitzke, age 79, of the Town of Menasha, was called home to be with his Lord on May 14, 2008, at Appleton Medical Center. Edgar was born on July 7, 1928, in Waupaca, to the late Ernest and Martha (Thiel) Kapitzke. He married Karen Schroeder on October 21, 1961, at Mt. Olive Ev. Lutheran Church, Appleton; she preceded him in death on September 12, 2002. Edgar proudly served his country during the Korean War in the U. S. Army. He was employed at the American Can Corporation/James River Corporation from 1950 until his retirement in 1992. Edgar enjoyed gardening, boating, fishing and hunting, bird watching, Nascar, football and especially the Green Bay Packers. Survivors include his children, Lori (David) Weyland, Neenah; Pamela Kapitzke (Jeff Erickson) Winchester ; Steven Kapitzke, Neenah; and Carla Clark, Neenah; his ten grandchildren, Melissa, Kimberly, David, Jr., Jodie Weyland; Trisha Kapitzke, Kayla Kapitzke, Nathan Erickson, Michelle Erickson, Tayler Erickson; and Darin Clark. Edgar is further survived by his brothers Harold Kapitzke and Donald Kapitzke. He was preceded in death by his infant daughter, Lena Sue, and his brothers Marlin Kapitzke and Gary Kapitzke. Funeral services for Edgar will be at 10:30 a.m. on Saturday, May 17, 2008, at MARTIN LUTHER EV. LUTHERAN CHURCH, 426 S. Lake Street, Neenah, with Rev. Rik Krahn officiating. Interment and Military Honors will be at Highland Memorial Park. Friends may call at the Wichmann Funeral Home, Appleton, on Friday from 4:00 p.m. to 7:00 p.m. and again directly at the church on Saturday from 9:30 a.m. until the time of services. The family would like to extend a sincere thank you to the staffs at Appleton Medical Center and ThedaCare at Home Hospice for their loving care and compassion.
Wichmann Funeral Home
537 N. Superior Street
Appleton 739-1231
Online condolences
www.wichmannfargo.com

What we once have enjoyed, we can never lose. All that we love deeply becomes a part of us.