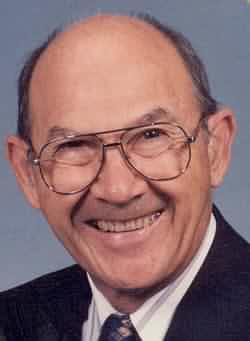 Age 80, passed away suddenly on Tuesday, December 16, 2003 in Loma Linda, California. He was born on January 17, 1923 in Appleton the son of the late Carl and Martha (Wagner) Glaser. He served his country in the Army Air Corps during World War II. He remained active in the Air Force reserves and Civil Air Patrol until he retired as a Lieutenant Colonel. On March 23, 1945 he married Ethel Hameister in Appleton. He was employed by AAL (now Thrivent) and Filmite Oil Corporation until he retired in 1980. Doc‚Äôs passion was flying. He was a bomber pilot instructor during World War II, and flew search and rescue missions for the Civil Air Patrol. Doc loved traveling; he had a great spirit of adventure and always was looking around the next corner and over the next hill.
He is survived by his wife of 58 years Ethel, his children: June (Robert) deVos of Hemet, California, Dan (Ruth) Glaser of Fremont, WI, Julie (Paul) Huelsbeck of Hortonville, and Paul (Penny) Glaser of Paddock Lake, WI; his granddaughter and the joy of his life, Claire Susana Huelsbeck of Hortonville; one brother Winton Glaser of Appleton; his sisters-in-law Lois Hameister, Carol (David) Plank; and one brother-in-law William Hameister all of Appleton; his niece Amy (Don) Schneekloth of Neenah, and a nephew Thomas (Mary) Plank of Appleton. He was preceded in death by his parents, a brother Charles Glaser, and his mother and father-in- law Herman and Gertrude Hameister.
A funeral service will be conducted on Monday, December 22, 2003 at 11:00 AM at Shepherd of the Hills Lutheran Church in Greenville with the Rev. Paul L. Shackel and Rev. Randy B. Loux officiating. Interment will take place at Riverside Cemetery. Friends may call at the Wichmann Funeral Home on Sunday from 6-8 PM and on Monday at the church from 10:00 AM until the time of the service. A memorial fund is being established.