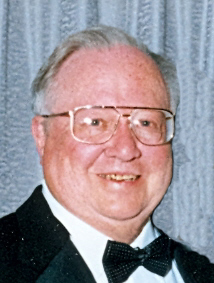 Dudley Joseph Dalton, age 90, of Kaukauna, passed away on Monday, March 3, 2014, at St. Paul Home. He was born on August 6, 1923, in Chicago, the first child of Dudley Joseph, Sr. and Emily (Goese) Dalton. Following his graduation from Moline High School, Bud attended Lawrence University where he was a member of Phi Kappa Tau fraternity. His studies were interrupted by WWII. Bud served as a 1st Lieutenant in the United States Air Force, stationed in the Pacific Theatre. After the war, he finished his education at the University of Wisconsin. Bud passed his CPA examination and began his 34-year career as an auditor for the State of Wisconsin.
In 1968, Bud married Alice Helen Hartman and loved as his own children, Deirdre and Douglas Hartman. Bud and Alice made their home in Kaukauna. They were fortunate in being able to travel the world, visiting all seven continents and over 100 countries. Especially dear to them was Ireland, where they met and which is home to Alice's ancestors.
Bud was a past member of the Kaukauna American Legion Post 41. He served several terms as treasurer of Trinity Lutheran Church. Bud was active on the Kaukauna Library Board, where he held various offices, including president and secretary. He also contributed to the community by being a member of the Kaukauna Utility Commission.
Bud is survived by his wife of 45 years, Alice; their children: Deirdre (Marc) Christman and Douglas (Karen) Hartman; grandchildren: Thomas Christman, John Christman and Anne (Scott) Brown; Gregory and Allison Hartman; great grandson, Carrick Edward Brown; sister-in-law, Barbara Dalton; five nieces and nephews, many cousins, good neighbors on Welhouse Drive and many dear friends, especially Melissa and Douglas Westemeier and their three sons, Travis, Brent and Gregory, who called Bud “grandpa”.
The Christian Funeral Service for Bud will be held at 11:00 am on Friday, March 7, 2014 at TRINITY EV. LUTHERAN CHURCH, 804 Grignon Street, Kaukauna. Pastor Timothy Wilkens will be officiating. A time of visitation will be held on Thursday evening at the Fargo Funeral Home from 4:00 pm until 7:00 pm and again at the church from 10:00 am until the time of service. Entombment will take place at Highland Memorial Park in Appleton. In lieu of flowers, memorials are appreciated to Trinity Ev. Lutheran Church, St. Paul Elder Service, or the Kaukauna Public Library. Online condolences can be offered at www.wichmannfargo.com.
The family would like to extend a sincere thank you to the staff at St. Paul Elder Service for the compassion and care shown to our family.