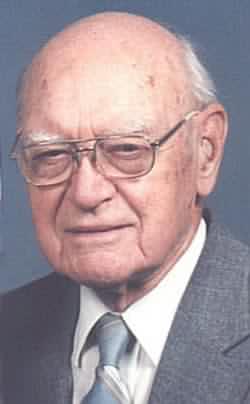 Ronald Dare Walling ‚ÄúDoc‚Äù, age 101, died Friday, May 16, 2003, in the presence of his wife and son. Doc was born April 5, 1902, in Maidstone, Kent County, England. He moved to America with his family in 1906 and grew up in Durand, Illinois where he graduated from High School. Following high school, Ronald worked numerous jobs including driving truck, warehouse work, farmhand, milk delivery, cab driver, and any other job he could get to help support himself and assist his single Mother, until he decided to become an Osteopathic Physician. He borrowed $200 and headed for the Chicago College of Osteopathy (Midwestern University/CCOM), graduating in 1931 with a degree in Osteopathy and Obstetrics. Doc Walling was a practicing physician for forty-six years.

While practicing in a temporary position in Madison, Wisconsin, he met an Appleton native, Evelyn Briese, whom he married in Chicago in 1931. They moved to Baraboo, Wisconsin and he opened his own practice in 1933 and enjoyed sharing the stories of the early years. ‚ÄúIn my first year of practice, I earned $900. That was during the depression.‚Äù Doctors were often paid in chickens, garden vegetables, or whatever else the patient could make or grow. Evelyn preceded him in death in 1966.

Ronald married Adelle Richter in 1967 and following his retirement, they moved to McAllen, Texas. As avid golfers and bridge players they organized the Thursday night Duplicate Bridge Club in 1980 and managed the Tournament Bridge Club until moving to Appleton in 1995. They have enjoyed playing bridge and golfing all over the country. Ron was dismayed when his knees began to fail and he could no longer golf, but he continued to enjoy reading, working Crossword Puzzles, and playing Bridge for mental alertness. ‚ÄúBridge is much more stimulating to the mind than watching television. If you don‚Äôt use it, you lose,‚Äù he told a reporter on his 90th Birthday.

Nearly 100 people joined Ron for his 100th Birthday in 2002. He received greetings from all over the Country, many commenting on how much they had enjoyed knowing him. He always listened and made thoughtful comments, he was caring and kind. Doc enjoyed the company of two wonderful women, having been married for over 35 years to each.
He is survived by his son Garth (Esther) Walling, Neenah; grandchildren, Scott (Linda) Nietz, St. Frances; Nicole (Bill) Smith, Neenah; Nancy Walling, Nichols; and his Great-Grandchildren Michelle and Ryan Perket and James ‚ÄúJT‚Äù Rau.

A Celebration of Life will be held at Our Saviours Lutheran Church, 3009 N. Meade Street, Appleton, Pastor Dennis Ellisen, officiating, Monday, May 19, 2003. Friends and family will gather to receive guests at 5:00 P.M. and the service will begin at 6:30 P.M. In lieu of flowers, donations may be made to the American Cancer Society or the Midwestern University/CCOM.