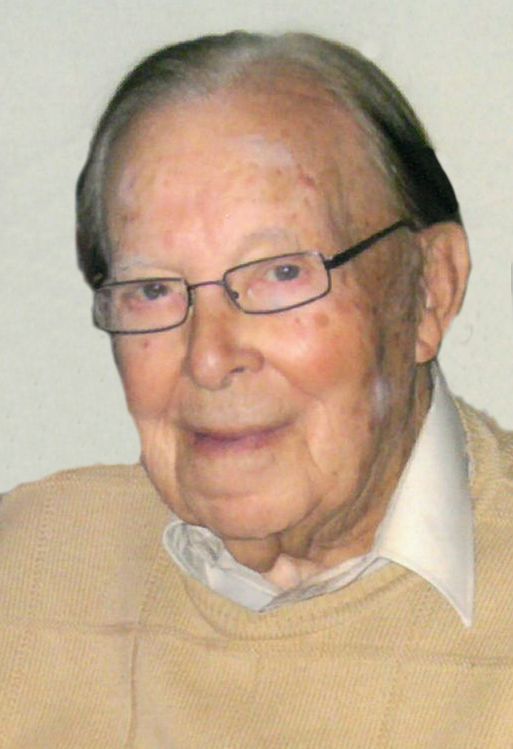 James “Pete” Mohr, age 93, of Appleton, passed away on Thursday, May 5, 2016. He was born on May 22, 1922 to the late Rev. John and Lydia (Alleman) Mohr in Pearl City, Illinois. Pete graduated from Campbellsport High School in 1940. After his high school graduation he attended Lakeland College for two years before his acceptance to Northern Illinois School of Optometry in Chicago. He also proudly served his country as a corpsman in the U.S. Navy during World War II and was awarded the World War II Victory Medal.
Shortly before finishing his doctorate Pete met the love of his life, Millicent “Millie” Berge. They were married on September 3, 1945 in Campbellsport, Wisconsin by his father, Reverend John Mohr and blessed with two beautiful daughters, Junell and Marsha.
Together Pete and Millie enjoyed golfing and were on several couples leagues. They were also members of Riverview County Club for forty years. During their seventy years of marriage they traveled extensively and where able to enjoy many family vacations. Pete liked to go fishing and was always willing to drive just about anywhere. Above all, Pete's fondest memories where those spent with his family.
Pete was a member of the Wisconsin Optometric Association, Y's Men and Kiwanis. He also spent a lot of his time giving back to his community. He frequently volunteered at Appleton Housing Authority, the Salvation Army and F.I.S.H. He also was a board member at Trinity Lutheran Church for many years and always enjoyed singing in the choir. Pete always loved to meet new people and keep active.
He is survived by his loving wife of seventy years in marriage, Millie; his two daughters, Junell Mohr of Camarillo, California and Marsha (David) Jensen of Appleton; three grandchildren, Jeremy (Lori) Jensen, Casey (fiancé Leigh Banks) Jensen and Whitney Jensen; two great-grandchildren, Emily and Brady Jensen. Pete is further survived by his brother, Carl Mohr; brother-in-law, Oliver Berge; sister-in-law, Dorothy Mohr and many other nieces, nephews and other relatives and friends.
In addition to his parents, Pete was preceded in death by his brother, George Mohr; brother-in-law, Lyle (Ellie) Berge and his sister-in-law, Jean Berge.
The funeral service will be held on Thursday, May 12, 2016 at 12:00 p.m. at TRINITY LUTHERAN CHURCH, 209 S. Allen Street, Appleton. Visitation will take place on Thursday at church starting at 9:00 a.m. until the time of the service at noon. Military honors will follow. Entombment will take place at Highland Memorial Park Cemetery in Appleton. In lieu of flowers, memorials will be donated in Pete's name. Online condolences can be expressed at www.wichmannfargo.com.