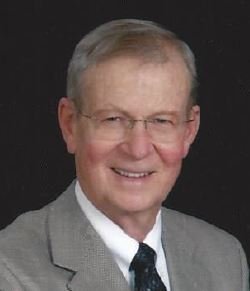 Fred J. “Fritz” Schuette, age 84, passed away after a courageous 19 month battle with cancer on Friday, February 20, 2015. Fred was born December 16, 1930 in Marinette, Wisconsin, the son of Fred J. Schuette, Sr., and Arvella F. (Savard) Rauscher. He graduated from Marinette High School in 1949, attended Oshkosh State Teachers College (1949 – 1951), transferring to La Crosse State Teachers College in 1951. He was drafted in January, 1952, and after two years of service in the U.S. Army was discharged as a Second Lt., returning to La Crosse and graduating in 1956. He married Nancy Jane Tryon on June 16, 1956. Enrolling at the University of Wisconsin (Madison) and graduating in the spring of 1957 with an M.S. Degree. His first teaching assignment was at Flint Jr. College (Mott Community College) where he coached track and cross country for ten years. His cross country teams won six conference championships and one national championship. His track teams won two conference championships and placed third in the national track meet. In 1968, he enrolled in the Ph.D. program at Michigan State University. Eventually joining the teaching staff as an Associate Professor with a Ph.D. degree in Continuing and Higher Education. During that time, he conducted many outdoor education workshops around the country in association with the Outdoor Education Project and the Lifetime Sports Workshops. He served as Executive Secretary of the Archery Manufacturers Organization (AMO) and the American Archery Council (AAC). In 1975, he returned to Mott Community College as Athletic Director and Chairman of the Physical Education Department, retiring in 1989. In 1992, he and Nancy moved to Freedom, WI, to be closer to their children and grandchildren. He lived for the summers at the cottage and Camp Grant with the family and grandkids. The fall was for hunting at “Nipper's Place” in Florence, WI. His family was the most important part of his life.

He was preceded in death by his parents, brother James, and in 2000, he lost his
dear wife, Nancy. He married Patricia M. Haen in 2003.

The funeral liturgy for Fred will be held at 11:00 am on Wednesday, February 25, 2015 at ST. KATHARINE DREXEL PARISH– ST. ALOYSIUS CHURCH, 2401 Main Avenue in Kaukauna. Fr. Jerry Pastors will be officiating. Inurnment will take place at Forest Home Cemetery in Marinette. The family will receive relatives and friends at the Church on Wednesday from 9:00 am until the time of mass. Online condolences can be offered at www.wichmannfargo.com. Military rites will be conducted by the American Legion Post #38 out of Appleton. Memorials can be directed to the Nancy Jane Tryon Schuette Scholarship, Farmers & Merchants Bank, P.O. Box 347, Marinette, WI 54143, or St. Katharine Drexel Parish, Kaukauna.