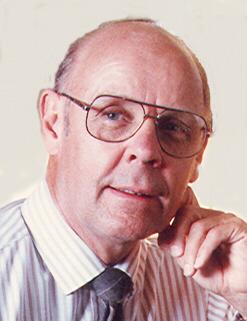 Age 80, of Sarasota, Florida, passed away on Tuesday evening, October 16, 2007 at Evergreen Nursing Home in Shawano, with his family at his side. He was born on October 11, 1927 in Effingham, Illinois to the late Jeremiah and Marie (Greuel) Raney. After graduating from Effingham High School in 1945 Gene served his country with the Navy at the end of WWII. Gene went on to graduate in 1955 from the University of Illinois School of Medicine and later served an Internship and Residency in Obstetrics and Gynecology at Cook County Hospital in Chicago. On April 21, 1956 he married Joan Scheve at Holy Name Cathedral in Chicago, they recently celebrated 51 wonderful years of marriage. Dr. Raney began practicing medicine in Appleton, Wisconsin in 1959. Between Medical Arts Clinics and private practice he cared for patients in Appleton for a total of 31 years. Just last week Gene celebrated his 80th birthday, along with his twin brother, Tom. After retiring Gene enjoyed playing tennis and golf, outdoor activities with his family, and spending his Summers at the cottage on LaMotte Lake.

Funeral services for Dr. Raney will be held at 5:00 P.M. on Saturday, October 20, 2007 at the Wichmann Funeral Home (537 North Superior Street). Friends may call on the family at the funeral home on Saturday from 2:00 P.M. until the time of the service. Interment will take place in St. Anthony Cemetery in Effingham, Illinois on Monday, October 22, 2007 at 2:00 P.M. In lieu of flowers, donations in Gene‚Äôs name can be made to Heartland Hospice or to a charity of your choice.