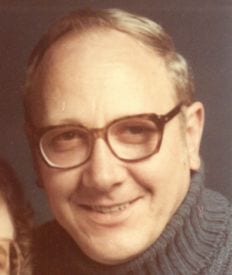 Douglas Landeau passed away on October 19, 2020, at his home in Appleton of a heart attack.  He was born June 17, 1935, to Lloyd Sr. and Marcella (Moeller) Landeau, born and raised in Sturgeon Bay, WI.  He graduated from Sturgeon Bay High School in 1953.  He was drafted into the Army in 1958 until 1960.  After basic training, he was transported to Germany.

He was employed with AT&T in Milwaukee, then transferred to Wisconsin Bell in Appleton, later back to AT&T but still in Appleton.  He was with the company for 32 years.  He and Beverly Bouche were married June 26, 1971.  Doug enjoyed visiting with his nieces and nephew about what was going on in their lives.  When Kevin married Doug’s youngest niece Lynn, he got to know them too.  They covered a lot of subjects from serious to humorous. Doug also liked fishing, reading, and bowling.

In September 2019, Doug fell at home and fractured the femur bone in his thigh.  He spent a month in a physical therapy unit, then moved to an assisted living so he could continue his therapy.  He came home February 29, 2020.

The funeral liturgy for Doug will take place at 11:00 a.m. on Friday, October 30, 2020 at ST. THOMAS MORE CATHOLIC CHURCH, 1810 N McDonald St. Appleton.  Visitation will be held from 10:00 am until the time of Mass.  The Mass for Doug will be livestreamed on his obituary page at www.wichmannfargo.com.  A celebration of Doug’s life will take place at a later date.  Due to Covid-19, we understand if you choose not to attend the funeral.  If you do attend, please wear a mask.

Many thanks to my sisters, Sue and Becky, my niece and god daughter, Kathy Vanden Hogen, and my niece, Renee Petersen, for all the help they gave me. My niece Michelle Koehler and her husband Bruce who visited Doug and called him often. Thanks to Les Ruen, a good friend, who helped Doug while he was recuperating from his fall and afterwards. They also had some good fishing times.

Thanks to his breakfast buddies who visited him.  They would meet once a week for breakfast and of course solved the worlds problem.  He sure missed their company and was waiting until they could get together again.