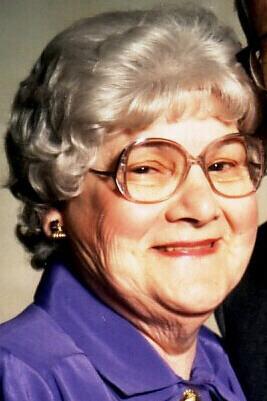 Dorothy Hoffman Weber (Mrs. Charles)
Appleton
Age 88, died Wednesday, February 21, 2007, at Heritage Woods Assisted Living in Appleton, where she had resided for 3 years. She was born in Mackville on October 10, 1918, to the late Philip and Agnes (Griesbach) Hoffman. Dorothy was a member of St. Joseph Catholic Church. Dorothy had attended an art school in Minneapolis years ago. Dorothy was married to Charles M. Weber at St. Edward‚Äôs Church in Mackville on May 31, 1941. They enjoyed 59 years of blessed marriage. Charlie died July 21, 2000.
After raising their children, Dorothy worked at St. Elizabeth Hospital and Peabody Manor. In her retirement, Dorothy took up painting again and we have many oil paintings that she left to us. Dorothy and Charlie were active in the Coalition for Aging, traveling often to Madison to lobby the state legislature on issues of concern to seniors. Dorothy was active in the Catholic Church and distributed communion to sick and homebound until she gave up driving. She was known to be cheerful and caring to all; during her 14 years of residence at the Heritage, she often mended clothing for ‚Äúthe older people.‚Äù
She is survived by five loving children, six grandchildren and four great grandchildren. They are Rita and Michael Shores, Crivitz; Nancy & Bob Margraf, Green Bay; Phil & Patti Weber, Sherwood; Carl & Barb A. Weber, Green Bay; Barb J. Weber, West Milwaukee. Nancy‚Äôs family includes Jennifer & Scott Vandeleest (children Skye Anna and Vincent), Green Bay; Becky Margraf & Craig Waddell, Salt Lake City, UT. Phil‚Äôs family includes Sarah & Todd Minten (children Joey & Jessica), Darboy; and Matt Weber, Weston. Carl‚Äôs family includes Joel & Jamie Weber, Naperville, IL; Julie & Marc Laudonio, Fitchburg.
She is survived by brothers: Urban (Dorothy) Hoffman, Menasha; Kenneth (Rita) Hoffman, Appleton; Elmer Hoffman, New Berlin; sisters-in-law, Dorothy Hoffman, Appleton; Verona Van Schyndel, Appleton; Mildred Weber and Florence Weber, both of Kaukauna; numerous nieces, nephews, other relatives and friends. In addition to her husband and parents, she was preceded in death by infant sisters: Hedwig and Roseanne; sisters Marcella (13 yrs old), & Rita B. Hoffman; infant brother, Raymond; brother, John (Alice) Hoffman.
The funeral mass for Dorothy will be celebrated at 4:00 p.m. Friday, February 23, 2007, at ST. JOSEPH CATHOLIC CHURCH, 410 West Lawrence Street, with Father Larry Abler, OFM Cap. as celebrant. Visitation will begin Friday at 2:00 p.m. at the church until the time of the mass. Burial will be in Appleton Highland Memorial Park Cemetery.
The family would like to thank Heritage Woods and Dr. Kristen Thomsen for their loving and tender care.
WICHMANN FUNERAL HOME
537 North Superior Street
Appleton 920-739-1231
www.wichmannfuneralhomes.com