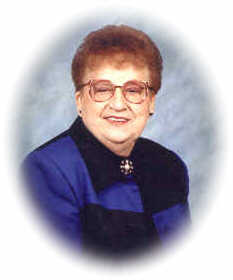 Age 78, died peacefully surrounded by her family on Monday, April 22, 2002, at the Hospice Home of Hope in Fond du Lac, WI, after a 12 year courageous battle with cancer.

Dorothy had various jobs until 1963 when she received her license to sell insurance. Dorothy was the first licensed woman insurance agent in Wisconsin. She worked for Bankers Life & Casualty until December of 1982, when she went to work for Garot ‚Äì Christman, later known as Midwest Insurance Services, until the time of her death.

Dorothy enjoyed being with people and helping them with their insurance needs and attending her grandchildren‚Äôs activities. Dorothy was known and loved by many at Schreiner‚Äôs Diner, her favorite place to eat. Dorothy was a devoted mother, grandmother and sister, which gave her the courage and the strength to fight her long battle with cancer. She will always remain in our hearts and be deeply missed.

She wished to express her gratefulness to all her care giving friends at Garot ‚Äì Christman, Midwest Insurance Services and her bosses, the late Fred Wilmsen, Bob Lee and Brian Schroeder; and to her best friend Elaine Hicks for all her help over the years.

She was preceded in death by a daughter, Renee on September 26, 2001; two sisters, Florence and Lois Ann and two brothers Gordon and Ray.

A memorial fund has been established in her name for the Hospice Home of Hope.

A special thanks to Hospice Hope staff and the Hospice Home of Hope.

We will always cherish our wonderful memories we shared with you.
We love you always.