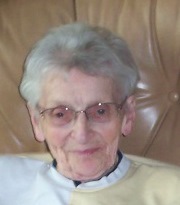 Dorothy (Evers) Reider, of Kimberly, passed away peacefully surrounded by her loving family on Thursday, November 12, 2015. She was born in Little Chute on March 23, 1925, the daughter of the late Peter and Anna (Bergman) Evers. On July 7, 1949, Dorothy married Carl Reider at St. John Catholic Church in Little Chute.

Dorothy was a homemaker for most of her life. After Carl's death in September of 1974, she accomplished so many things. First, she received her driver's license. She will be remembered driving her 1967 Catalina “the boat” and having to sit on pillows to be able to see over the steering wheel with all her little bunnies in the back seat. Dorothy worked at Franciscan Care, now known as Appleton Health Care Center. Dort enjoyed cooking and baking and we will all miss her famous chocolate chip cookies. Her family was her life and she looked forward to spending time with her children, grandchildren, and great grandchildren.

The funeral liturgy for Dorothy will be held at 11:30 am on Tuesday, November 17, 2015 at HOLY SPIRIT PARISH, HOLY ANGELS CHURCH, DARBOY, W2796 Hwy KK. Fr. Bob Kollath will be officiating. The family will receive relatives and friends at the church on Tuesday from 10:00 am until the time of mass. Inurnment will take place at St. Joseph Cemetery in Appleton. In lieu of flowers, a memorial fund has been established. Online condolences can be offered at www.wichmannfargo.com.

The Reider family would like to extend a special thank you to the staff at Kimberly Assisted Living, Heartland Hospice, Home Instead and her caregiver Mary Kalies.