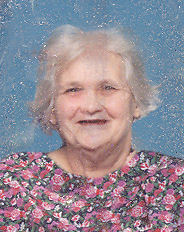 Dorothy greatly enjoyed her work at Lake Land Industries where she painted ceramic home décor. She also enjoyed playing bingo, card games, crocheting, and especially talking on the phone with her friends and family.

Dorothy will be dearly missed by her children: Sam, Ellen, Charlotte, and Jenny; five step children, 14 grandchildren and four great grandchildren. She is further survived by her brothers and sisters, other relatives and friends. Dorothy was preceded in death by her parents, her husbands and many other loving family members.

The Funeral Liturgy for Dorothy will be held at 11:00 a.m. on Wednesday, March 23, 2016, at ST. JOSEPH CATHOLIC CHURCH, 410 West Lawrence Street, with Father Jim Leary, O.F.M. Cap. officiating. A time of visitation will be held from 9:30 a.m. until the time of Mass. Online condolences may be expressed at www.wichmannfargo.com.

Dorothy's family would like to thank all her caregivers, nurses and hospice workers for their compassionate care throughout the past year.