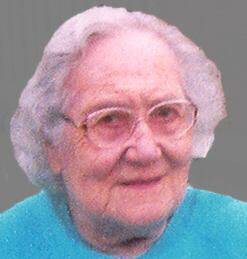 Dorothy Clark, age 98, passed away peacefully on Thursday, March 15, 2007 at a local nursing home. She was born in Hilbert on October 3, 1908, daughter of the late Hugo and Helen (Schaefer) Geyso. She graduated from the Hilbert High School and on November 25, 1926 married Fredrick Clark. He preceded her in death in September of 1990. The couple lived in Little Rapids and Omro before moving to Appleton in 1930. It was at that time that Fredrick and Dorothy opened Clark‚Äôs Cleaners. Dorothy was an active part of the business until she was ninety years old at which time the business was sold. She enjoyed coming to work each and every day, and very much enjoyed and appreciated the many friendships she made at the store over the years. For the past four years, Dorothy had been a resident at Oakridge Gardens, where she enjoyed the many activities, especially playing cards. She made many friends at Oakridge, and was known by all as a great one for reminiscing. Dorothy was a longtime and faithful member of First United Methodist Church in Appleton, the Order of the Eastern Star, White Shrine, and Pythian Sisters.

She will be deeply missed by her son: Harlan (LaVerne) Clark of Appleton; two grandsons: Bruce (Laura) Clark of Appleton and their sons Taylor and Jordan; and Jeffrey (Dawn) Clark of Menasha and their sons Ryan and Kaden; a great-granddaughter Delaney; and a sister: Stella Fassbender of Kaukauna. Dorothy was preceded in death by her parents, her husband, sisters Esther Lee and Mabel Stanelle, and brothers Otto and Elmer Geyso.

Funeral services for Dorothy will be held at 2:00 PM on Saturday, March 17, 2007 at the Wichmann Funeral Home in Appleton, with Rev. David Brice officiating. The Order of the Eastern Star will meet at 1:45 for a brief service. Interment will take place in Highland Memorial Park. Friends may call at the funeral home on Saturday from 11:00 AM until the hour of the service. A memorial fund has been established for First United Methodist Church.

The family would like to extend their deepest thanks to everyone at Oakridge Gardens for the loving care and concern they have shown over the past four years. Dorothy loved all of you.