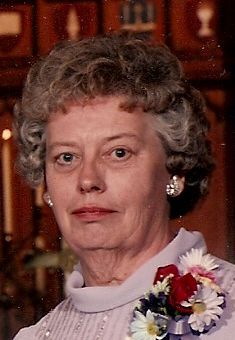 Doris Esther Merkel, 85, formally of Appleton passed away on Thursday February 21, 2013 at Valley VNA in Neenah, WI. After a long battle with Alzheimer's, Doris died peacefully in her sleep. Doris, the oldest of two was born August 14, 1927 in Chicago, IL to Carl Victor and Ethel Mae (Linman) Dahlberg. She attended Paul Revere Middle School and graduated from Hirsch High School in Chicago. After graduation from Moser Business College in downtown Chicago, she was employed at Swift & Company as a secretary in the Marketing Department. While living at home on Normal Avenue, she met John Merkel who was living next door with family friends while attending Northwestern University after returning from WWII. He then worked for Con Ed in downtown Chicago. They were married in September of 1952 and resided in Milwaukee for two years before moving to Appleton where they raised their family.

Doris was active as a volunteer with Trinity Lutheran Church. For years she was a driver for their FISH group where she would transport clients back and forth from doctor appointments or shopping. After many years of driving she became chairperson for the group. Doris enjoyed bowling and golf where she was a member of leagues for many years. Doris' grandchildren were the love of her life. She enjoyed spending time with her grandchildren and taking them to parks when they were young. Over the past thirty years she has enjoyed going to Florida to escape the Wisconsin Winters, to enjoy the Florida sunshine.

She is survived by her four children; Janet Pachmayer of Mequon, Joan (Rick) Irwin of McFarland, Jim (Melody) Merkel of Fond du Lac, and John (Kathy) Merkel of Neenah. She is further survived by a brother, Carl Dahlberg of Chicago, IL, and her grandchildren, Dawn (Brian) Phillippi, Ron Evans, Matt Evans, Brett Merkel, Lauren Pachmayer, and Alex Pachmayer. She also has one great grandchild, Courtney Mei Phillippi. Preceding her in death were her husband John, and her parents.

We miss you Mom but will carry your love in our hearts forever.

The funeral service for Doris will be held at 12:00 p.m. noon on Saturday, February 23, 2013 at Wichmann Funeral Home Tri-County Chapel. Pastor Lisa Ubbelohde will be officiating. Entombment will take place at Highland Memorial Park in Appleton. A time of visitation will be held from 11:00 a.m. until the time of service. In lieu of flowers, a memorial fund has been established in her name for the Employee fund at Valley VNA and the Alzheimer's Association of Greater Wisconsin Chapter.