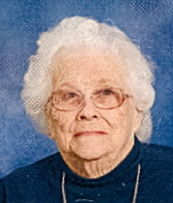 Doris Dreyer, age 91, of Little Chute, went to be with her loving husband of 63 years on December 26, 2012. She was born on January 22, 1921, in Minneapolis, Minnesota, the daughter of the late George and Emma (DeBaun) Warner. Doris graduated from West High School in Minneapolis and then attended Carleton College for two years. In 1944, she served in the U.S. Navy as a yeoman, and was honorably discharged as a seaman 1st class on August 28, 1945. On October 8, 1945, Doris married Norman G. Dreyer in San Diego, California.

The funeral service for Doris will be held at 11:00 am on Wednesday, January 2, 2013 at Peace United Methodist Church, 2300 E. Wisconsin Avenue, Kaukauna. Pastor Lucretia A. Fehrmann will be officiating. Burial will take place at Kelso Cemetery in Kaukauna. A time of visitation and support will be held at the church on Wednesday from 9:00 am until the time of service. In lieu of flowers, memorials to the church are appreciated. Online condolences can be offered at www.wichmannfargo.com.